I am NOT okay with my road trip being (essentially) over, but if it has to end, I’m glad it ended with today.

I left Erin and Tim’s apartment to meet Kaitlyn for brunch.  She was friends with Michal in Austin, and when she moved to Dallas, Michal told us to be friends.  She’s back in St. Louis (where her family is) after going through some truly hellish months.  It was nice to hang out, catch up in person, and support each other.  I’ve always liked Kaitlyn because of her Strong Independent Woman attitude, but I found yet another commonality between us today.  Neither of us are very interested in mastering anything; instead, our passion is in learning enough to be competent and then moving on to something else.  She’s always such an encouragement to me, and I hope in some small way I was the same for her.

In the spirit of road tripping (and eating up spare time) I spent the afternoon at the St. Louis Zoo, which is totally free if you park a little bit further away and walk in.  Most of the animals were hiding because of the cold, but I did get to see the baby elephant.  And I took a selfie with a penguin, because if ever I had #squadgoals…. 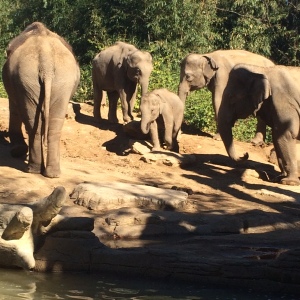 When I started driving, I quickly passed into Illinois, completing the circuit back to my homeland.  I am…ugh, really not okay with this!  For a while, when I was incapacitated with a cold, all I wanted was to be home and in my own bed.  But after a day of sleeping and a lot of Dayquil, I’m not ready for this road trip to be over!  I don’t want to be home!  I want to keep crashing on couches and in guest bedrooms, seeing new landmarks and tourist attractions, having deep conversations with new and old friends.  This trip has confirmed that I have a nomadic heart, and I am happiest when I am wandering.

But whatever, I’m back in Illinois. 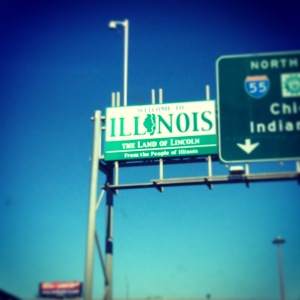 At least I’m not HOME home, yet.  After a too-short drive, I arrived in Springfield where I spent the night with Joe and Emily.  They are the best sort of friends who simply include me in their normal evening activities.  We ate dinner together, during which I mostly moaned around about how I JUST WANT TO TRAVEL EVERYWHERE ALWAYS like a spoiled child, and then they taught me how to play cribbage.  It involves math, so I only won by saying, “This adds up to fifteen, so…two points.  And….that’s it?”  Emily would shake her head.  “No, uh, um.  Oh, this adds up to fifteen!”  Then Joe would point out two other things I’d missed and I wound with fifty million points (like I implied, math is not my strong suit). 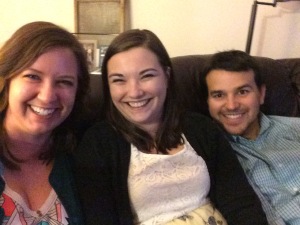 Then we went house hunting on the interwebs!  They’re narrowing down some options, so I supplied some helpful advice on how they should spend their life savings.  I then made them look at MY dream house, which is a tiny house, any tiny house, THEY ARE SO CUTE.  Now Joe and Emily know not to trust any of my realty suggestions.

We finished the evening by watching Best Time Ever with Neil Patrick Harris (I want a NPH, any NPH, HE IS SO CUTE) and then we all went to bed.  Well, they went to bed.  I went to the couch and spent two more hours piddling around on the internet.

And tomorrow it’s over.  I’m so distraught.  I will be glad to see people in Peoria, but THEN WHAT?  Well, Seattle in November and Greece in January?  But it’s not enough!  Man, I’m like some kind of Greek myth that’s about to implode – my fatal flaw is my greedy wanderlust.  Picture me as a giant devouring worlds.  Hm, perhaps I’ve been listening to too much Percy Jackson.

One thought on “Selfies with Penguins”