One of the classes that I lead at HD is called “Boom Team.”  It’s meant to be an arts and crafts time, but I’m a counselor, so I turned it into art therapy.

I assigned pretty typical colors to the eight emotions – bright colors for the happy emotions, solid stark colors for the bad.  The real fun came in creating my self-portrait, which I’ll describe by emotion. 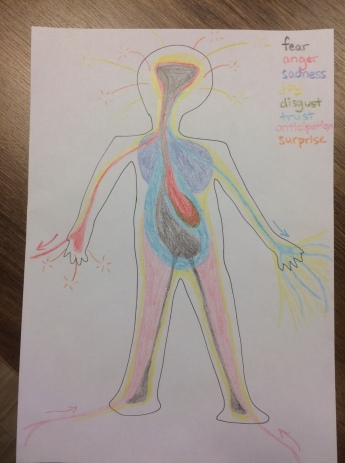 I had the other women make two emotion portraits – one of them now and one as how they wish to be.  It was very interesting to see that one woman’s future portrait was of her pushing away all four negative emotions, while the other woman decided to keep just a little bit of anger, fear, disgust, and sadness in her head and heart.  “Why?” I asked, incredibly happy.  “Because I know that even bad emotions have a purpose.”

They asked why I didn’t do a second portrait.  I didn’t because there isn’t much I want to change.  I’d like fear to shrink a little, but mostly I feel really at peace with my emotional makeup.  For the first time, I think!  I’m really settling into who I am, loving myself and valuing the way I am made.  I didn’t expect that.