Okay, I’m sad to say I didn’t like Close Kin nearly as much as I liked The Hollow Kingdom.  Although it was so much fun to return to a world where Victorian humans interact with goblins, elves, and dwarves, there was not nearly enough Kate and Marak to satisfy me. Of course, this was not their love story.  It was…Emily and Seylins’?  Which is weird, because they spend very little of the book together.  Even when they are finally reunited, we hardly get to see them.  Other couples, like Sable and Tinsel, dominate the last fourth of the book.  Which is okay, I guess, because the goblin/elf relationship was oddly sweet.  But it was disorienting to root for one couple the whole time, only to be left with an anticlimactic reunion.

The best part, for me, was getting to see the cultural differences between goblins and elves.  I loved Dunkle’s subversion of the norm, so that her goblins are loyal, respectful, and kind, while her elves are cruel, vain, and dirty.  The ugly creatures are beautiful inside, and the beautiful creatures are ugly inside.  Fun!  Semi-relatedly, I also really love how the goblins see their deformities as based in strength.  There was one especially sweet scene when a goblin heals someone’s scars, but not fully.  He’s happy about this, because the scars are reminders of her courage, and he wants her to be able to keep some part of that.

I still love the world Dunkle has created, but it was definitely the Beauty & the Beast storyline of Kate and Marak that so completely enthralled me in The Hollow Kingdom.  Guess I’ll just have to reread it! 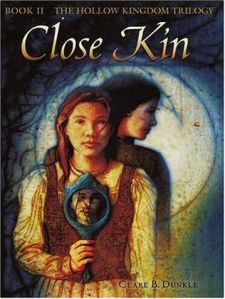 “Goblins are just a tale to frighten children.”

Emily might have believed this once, but she knows better now.  For years she has been living happily in the underground goblin kingdom.  Now Emily is old enough to marry, but when her childhood friend Seylin proposes, she doesn’t take him seriously.

Devastated, Seylin leaves the kingdom, intent on finding his own people:  the elves.  Too late, Emily realizes what Seylin means to her and sets out in search of him.  But as Emily and Seylin come closer to their goals, they bring two worlds onto a collision course, awakening hatreds and prejudices that have slumbered for hundreds of years.

In this sequel to The Hollow Kingdom, Clare Dunkle draws readers deeper into the magical world that Lloyd Alexander, winner of the Newbery Medal, calls “as persuasive as it is remarkable.”

Want another opinion?  Check out reviews by The Thunder Child and Scribd.