I left Stephanie this morning, which sucked, but I went immediately to the Parthenon in Nashville, which helped.  It’s 80 degrees and breezy, so I walked around in the grass holding my shoes.  I stuck in my earbuds and let the “Finding Neverland” soundtrack convince me that life is magical, and my life is beautiful.  I enjoyed the feeling of perfect contentment that comes from a perfect moment. 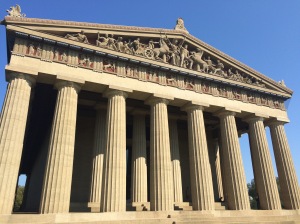 Last night I had dinner with Kyle (a friend from my church youth group days) and his wife.  We discussed being no-longer-Baptist, and some of the more mystical reasons why we don’t fit in the denomination that raised us.  He said his pet theological theory is that while taking Communion, time and space collapse.  In that moment, you’re taking the bread and the wine with all believers around the planet and throughout time.  More than that, you are experiencing Jesus’s death on the cross each week while you take the elements – not that Jesus dies again and again (his love and power is such that it’s only necessary once) but the act of Communion is otherworldly.  He dies as we drink and eat, and we are saved.

Standing at the Parthenon, I kept thinking about time and space collapsing.  Granted, this facsimile is not the same as the one sitting on the Acropolis in Athens.  But as I walked its corridors and touched its pillars, I felt like time was collapsing.  I’ve circled Greece for so long.  It was the first place I went when I left the United States.  I returned two more times.  I love its history and its mythology.  I reconnected with Greek friends, who offered me a job, and soon I will make Greece my home for a year.

Standing in Nashville, Tennessee, staring at Greek friezes on a remade Parthenon halfway through my road trip to raise funds so that I can live in Greece and stand in front of the first Parthenon, time and space collapsed.  God’s ways are mysterious and scary, but so good.  I can’t wait to take this next step and see where it takes me.

One thought on “Deep Thoughts at the Parthenon (in Nashville)”