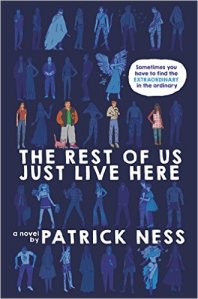 I really enjoyed this book – a satire on all the “Chosen One” YA books, where teenage angst is explained via the metaphor of soul-eating ghosts or romantic vampires.  In The Rest of Us Just Live Here, it’s only the indie kids who have to deal with the supernatural:  Mikey and his friends are struggling to survive their very realistic ordeals:  anxiety attacks and OCD compulsions, eating disorders, overbearing parents, and….okay, so Jared isn’t so normal.  He’s a gay God of the Cats, and he is awesome.

Ness starts each chapter with a summary of what crazy shenanigans the indie kids are getting up to–what the plot of a stereotypical YA book would be.  For instance, Chapter 7 begins:

Chapter the seventh, in which Satchel and the rest of the indie kids share their grief for Kerouac by throwing stones soulfully into a nearby lake; wandering off on her own, Satchel takes the amulet in her hand and has a vision of the single most handsome boy she’s ever seen in her life; Dylan, finding her, takes the opportunity to kiss her, and though his lips taste of honey and vegan patchouli, she pushes him away, revealing what the amulet told her; “The Immortals are here,” she says.

And then the chapter is actually about Mikey visiting his grandma in a nursing home and coping with the fact that Alzheimer’s is horrifying.  It’s a neat set-up, where every once in a while Satchel will stumble through the main plot on her wild quest, but Mikey, Meredith, Henna, and Jared are unconcerned.  They’ve got their own issues to deal with.

Mikey’s family is really something special (in the YA world).  I loved the depth of their dysfunction.  His dad is a barely functioning alcoholic, his mom is an ambitious politician, his older sister died for three minutes after her anorexia put her into cardiac arrest, and his younger sister is obsessed with boy bands.  Mikey himself has an anxiety disorder.  I really loved that, although there were hints of his parent’s underlying love for him, relationships weren’t resolved tidily by the end of the book.  The best thing for him really is to leave for college and put some distance between himself and his parents.

I also loved how Ness dealt with Mikey’s anxiety.  It was crushing to see him get trapped in loops of washing his hands.  It was reassuring to see his friends help him in his moments of weakness.  And (especially as a counselor) it was awesome to see him admit he needed professional help and started seeing a therapist.

I really enjoyed The Rest of Us Just Live Here.  It was a great reminder that even those without cosmic responsibility have an important life….and that if you’re ever going to have a character who is a minor deity, he should always be a God of Cats.

What if you aren’t the Chosen One?

The one who’s supposed to fight the zombies or the soul-eating ghosts, or whatever the heck this new thing is, with the blue lights and the death.

What if you’re like Mikey?  Who just wants to graduate and go to prom and maybe finally work up the courage to ask Henna out before someone goes and blows up the high school.  Again.

Because sometimes there are problems bigger than this week’s end of the world, and sometimes you just have to find the extraordinary in your ordinary life.

Even if you best friend is worshipped by mountain lions.

Award-winning writer Patrick Ness’s bold and irreverent novel powerfully reminds us that there are many different types of remarkable.