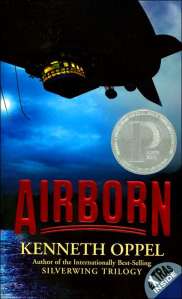 Tragedy averted!  For the first third of Airborn, I thought I’d maybe found the first Kenneth Oppel book I didn’t like.  While airships are always amazing, I just wasn’t hooked by Matt’s story.  Not even the recklessly intelligent Kate could get me further than: oh, okay.  BUT THEN PIRATES.  Sky pirates!  And shipwrecks on deserted islands that are not quite as deserted as previously assumed!  AND CLOUD CATS, which are like dragons, but with cat features!  It turns out Oppel couldn’t have tailored a book more to my tastes.

As always, I really like the way Oppel balances a kid-friendly innocent-seeming world with some really disturbing reality.  Death happens, and not only to those who deserve it.  The good guys are pretty uniformly good, but the bad guys…are not entirely bad.  I really liked getting to see into the daily life of Pirate Captain Szpirglas, although let’s be real – a charming sociopath would have been fascinating to me no matter what.

Airborn has science, adventure, exploration, and romance bound up in a really fun slightly fantasy world.  I’m desperate to read the next one in the series, but my library doesn’t have it available for Kindle checkouts!  Agggh!

Matt Cruse is a cabin boy on the Aurora, a huge airship that sails hundreds of feet above the ocean, ferrying wealthy passengers from city to city. It is the life Matt’s always wanted; convinced he’s lighter than air, he imagines himself as buoyant as the hydrium gas that powers his ship. One night he meets a dying balloonist who speaks of beautiful creatures drifting through the skies. It is only after Matt meets the balloonist’s granddaughter that he realizes that the man’s ravings may, in fact, have been true, and that the creatures are completely real and utterly mysterious.

In a swashbuckling adventure reminiscent of Jules Verne and Robert Louis Stevenson, Kenneth Oppel, author of the best-selling Silverwing trilogy, creates an imagined world in which the air is populated by transcontinental voyagers, pirates, and beings never before dreamed of by the humans who sail the skies.