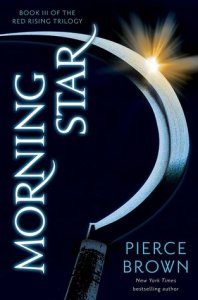 Morning Star is the third book in the Red Rising series.  Check out my reviews of Red Rising and Golden Son before reading this one!

Pierce Brown is a genius.  His science-fiction-solar-system-Hunger-Games trilogy about social hierarchy, revolution, and loyalty is SO GOOD.  And so complex, which is why I was grateful that at the beginning of this final installment, he offered a recap of the previous two books and rundown of the major characters.  But even though there were a lot of details I had forgotten, I was immediately sucked back into the drama of Darrow’s life as he tries to lead a revolt against the seemingly all-powerful Golds without abandoning his morals in the process.

That’s what I liked most about Brown’s series, I think.  It’s morally complex, and it doesn’t shirk away from the reality that in order to take down a corrupt system, sometimes you have to become a little corrupt yourself.  Darrow does things he isn’t proud of, sacrifices people he shouldn’t, and makes hard decisions without fully knowing if they were the right choice.  But he wrestles with these experiences, and he let’s himself be hurt by what happens, and THAT, I think, is what makes him so admirable.  He doesn’t try to pretend that the ends justify the means.  Sometimes the means are really, really, awful.  He doesn’t sugar-coat things, but he keep going and trying and doing the best he can.

The other thing I really love about Brown’s series is that I legitimately never know what will happen next.  He is one of the most creative writers I know, and he packs a TON of action into each book.  There were twists that made me excited and twists that made me furious, but every single one had me turning pages faster and faster to find out what would happen next.  Although I HATED some of Brown’s decisions (WHY did *censored* have to die!?) I really admired the fact that Brown created a universe where no one felt safe.  The war felt real and dangerous, and I legitimately didn’t know who would survive until the end.

But there was an end!  And it was a very satisfying conclusion to a wonderfully entertaining and thoughtful series.  I can’t wait to see what else Brown has up his sleeves for future stories.

Darrow would have lived in peace, but his enemies brought him war. The Gold overlords demanded his obedience, hanged his wife, and enslaved his people. But Darrow is determined to fight back. Risking everything to transform himself and breach Gold society, Darrow has battled to survive the cutthroat rivalries that breed Society’s mightiest warriors, climbed the ranks, and waited patiently to unleash the revolution that will tear the hierarchy apart from within.

Finally, the time has come.

But devotion to honor and hunger for vengeance run deep on both sides. Darrow and his comrades-in-arms face powerful enemies without scruple or mercy. Among them are some Darrow once considered friends. To win, Darrow will need to inspire those shackled in darkness to break their chains, unmake the world their cruel masters have built, and claim a destiny too long denied – and too glorious to surrender.