This week was super weird.  I was either hard-core working or hard-core lazing around, which is, actually, my two favorite modes of existing.

On Sunday, I skipped church because my birthday weekend had depleted all of my Social Batteries.  Olga stopped by my room after her service, and we wound up talking for a couple hours about singleness and past romances and future hopes (thus proving that although five minutes of chatting puts me in a coma, I can have deep conversations for days).  She was hugely encouraging to me, especially when she said, “I’m not really interested in marriage unless I am around someone I want to marry.”  And I thought – YEAH.  Why am I letting myself get distracted by Wishes and Maybes and Daydreams?  Why am I wasting time swiping left on Tinder?  There’s no one around that I want to marry, so until there is, I’m going to focus on being awesome and working hard and creating meaningful experiences.

On Monday, I went to the mall for the first time!  It would take 13 minutes to drive there, but it took me an hour by public transportation.  I took the prostiakos for the first time (the metro, but for the suburbs), and it was very rewarding to figure out a new facet of the Athens public transit system.  The mall is like, super fancy and huge, and I was once more ashamed to realize I have very low standards for Greece.  It’s a European city!  It’s awesome!  How did I get so lucky as to stumble into a life here?

When I got back to the school, I met up with Olympia, who took me to a huge and fancy outlet mall very near the school that I had no idea existed.  I bought Nike tennis shoes for € 28, so now I can work out without breaking my foot.  But the real reason for the adventure was that during my birthday weekend I discovered Olympia owns a motorcycle!  I LOVE motorcycles!  As soon as we put on our helmets and pulled onto the road, I felt my mouth pulling into an uncontrollable grin.  There is just something intoxicating about moving fast down a road, feeling the wind pull at you as you watch the world fly by in front of you, beside you, below you.

On Tuesday Dina took me to the house, which is very nearly done and looks SO GOOD.  Then we all went back to Anthi’s house for my first staff meeting.  They surprised me with a birthday cake, and then I struggled to listen to Greek for two hours.  Once Dina and Natasha left, Anthi and Francisca and I stayed to talk about the Day Program, and we used English.  I had two hours worth of speaking bottled up inside of me, so I mostly said, “I LOVE THIS!  I WANT TO DO THIS!” a lot. 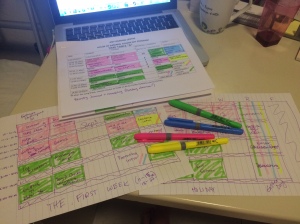 Well, not really, but I did push hard for regular counseling sessions and consistent class schedules.  Francisca had to leave to pick up her kids, prompting my genuine lament: “Why can’t everyone be single and childless??”  Anthi and I had a huge amount of fun planning the day program, though.  We got out highlighters and pens and pads of paper.  We criticized each other’s ideas and came up with better ones.  We high-fived and laughed a lot.  She asked if I could make up spreadsheets on my computer and I responded emotionally, “I was hoping you’d ask!”

On Wednesday, I met with Dina briefly to respond to emails from some of our major donors (one church got so excited about donating $2,500 that they decided to do it again, and one guy who promised $2,000 secretly donated $4,200 instead!)  We also went over the powerpoint she will use when she goes to North America in a month…which is also big news!  She’s going to be in Chicago for a couple days, and while she has events planned there, I desperately want her to to be able to spend time in Peoria.  And I want Peoria to welcome her with open arms!   I wish I were going along with her, but I just want to go for that one day, not two weeks.

On Thursday, the Day Program team was supposed to meet up again for a long day of scheduling, assigning classes, and preparing lessons…followed by food and TV shows!  But the metro went on strike, so we had to cancel.  I was really disappointed, because it’s been so fun to actually focus on the teaching aspect of my time here, but….I felt better when I bought 80 Days, a computer game based on Jules Verne’s novel, and played it in pajamas for like, the whole day.

On Friday, I left for a three-day conference in Corinth!  Actually, I wrote this all on Thursday night, and just arranged for it to post itself on Saturday, because I didn’t bring my computer with me.  I’ll do a separate post on the conference another time, because the resort we’re staying at looks AMAZING and I expect I’ll want to share pictures.