Luciana is the second Day Program volunteer.  Normally she will work just one day a week, but since our first week was abnormal, she’s been coming more often.  She’s from Brazil, she’s athletic, and she’s studied sociology, counseling, and social anthropology. She’s engaged to a Greek guy even though she’s a year younger than me, and she’s lived in Brazil, Portugal, and Northern Ireland.

Early in the week, we both stayed late to do some work, and I “kindly” told her “helpful” things that were really just me bragging about how I had been there longer than her and knew more than she did.  I went to the bathroom, realized what I was doing, and came back into the office.

“Hey, if I’m ever being obnoxious, it’s because I’m intimidated by you,” I said.  “Before you came, I had a very specific role that no one else in the office could fill.  But your talents  overlap mine, and I’m worried that you will replace me.”

Just like that, the jealousy went away.  Speaking our grossest feelings has an amazing ability to dissipate them.

And thank goodness, because she is so great!  On Thursday, we once again stayed late in the office.  We meant to do work, but we wound up freaking out about how many interests we have in common – video games, music, and movies.  We talked for three hours, then decided to go to a free Greek lesson together in Exarchia, the anarchist area of Athens.  I walked happily through graffiti-ed streets full of people with bright hair and facial piercings, passing coffee shops wafting the smell of weed, and I said, “I love it here!”  “I thought you would,” Luciana said.

After the lesson, I suggested we grab something to drink.  We got tea at a hookah bar and talked about boys and relationships and I didn’t even get mad at her for being in a happily committed relationship while I am not.  During the metro ride home, we talked about all the countries we’ve visited and made plans to watch The Fall, my all time favorite movie that isn’t The Lord of the Rings.

I LOVE THE DAY PROGRAM.

I love the system, where we as staff participate equally, answering questions about our addictions and defense mechanisms and health struggles and friendship desires.  I love that “A” knows how much I fear loss of control and that I am learning how to be healthy just as much as she is.

I love listening to Luciana and Francisca teach on topics they care about.  I love gathering half an hour before we start so that we can pray for each other in detail.  I love every new purchase that hangs on a wall and makes it feel more home-like.  I love walking from the metro under trees with my backpack.  I love sitting at my desk and being in the same location every day for the same amount of hours.

I’ve taught three classes so far (Monday, Tuesday, and Wednesday were introductory – Thursday and Friday started our actual lessons).  My addictions class was okay but nothing revelatory.  But on Friday I did an art therapy class and an acting class.  I already wrote about the art therapy, so now I’ll discuss the acting.

I intended to just play some fun games (it was just the two of us since it was the last class of the day and I’m the only full-time staffer), so we started with a “hypnosis” game.  I put my hand six inches from “A”s face, and wherever I moved it, she had to keep the distance the same.  We traded places and cracked each other up, making each other stick their heads out the window, collapse to the floor, or jump.  I asked her what she thought afterwards, and she said, “Well, it’s fun when it’s just a game, but I thought about how in real life, following someone blindly makes you look like an idiot.”

“HOLY COW,” I said.  “I did not even think about underlying messages a tiny bit.  You’re so right!”

Then we played a game where one person called out an event and the other had to strike a pose.  “You’re being attacked by a bear!”  “You’re about to meet a famous preacher but you have to pee really bad!”  “You just hurt my dog and you don’t think I saw you.”

When we debriefed, “A” said, “We kept things pretty easy for each other.”

I was still thinking about her not-so-subtle challenge re: the health of her dog.  But she continued, “No one said, ‘You’re being raped'” or anything like that.  If there were other girls here, someone would have said that, or worse, no question.  There probably would have been a fight.”

Once again, my mind was blown.  I was reminded of just how different my perception of a “normal” event is compared to others.  But her comment led to a great conversation about how those sorts of fights would definitely happen, and that that was okay.  Maybe that they were even good things, because then we could all learn how to fight well and recover from being angry with each other.  I only half believe that, because anger terrifies me, but that’s another thing I get to work on through our Day Program.

Even though I’ve found an amazing apartment for less than what I’m paying to live at the college, I’ve been intimidated by the fact that I have to furnish it.  That costs money, and would it be worth moving if I have to spend a lot of money?  But then “A” suggested that I use all the things she has at her apartment since she’ll be moving into HD and would have to pay to store them somewhere anyway.

“You told me earlier that girls who come to stay with us will feel like we expect something from them in return for what we’re offering.  I don’t want you to feel like that at all,” I said.

“I have spent the last six years getting help from people.  I have taken and taken and taken.  It feels really good that I am able to give something back!”

She has to move out of her apartment by the end of the month, but I’m not moving into mine for another two weeks.  Luckily, my soon-to-be landlord agreed to let me move in her things early, which we (plus Anthi) did today!  I now have a refrigerator, washing machine, bed, kitchen supplies, and multiple shelves.  I’ll have to get a few more pieces of furniture, but I have enough to live comfortably.  It is really such a huge gift, and I still feel a little weird about it, but I’m trusting that in this case, I am allowing her the privilege of being the Giver.

I really love my apartment.  I have missed making scrambled eggs!!  (I don’t use the communal kitchen at the college because…I don’t like to risk making small talk when all I want is to make food in silence.)  And I can like, put flowers in places and have pots and pans, and maybe I’ll turn the supply closet into a reading nest, and I get to feel a sense of ownership and rootedness.  I CANNOT WAIT.

This is also maybe a good time to say that I’m pretty definitely going to be in Greece through March of 2017.  Even if I decide not to stay another year or even if official visas aren’t renewed, I can go home for Christmas and then return for another three months with a tourist visa.  That way I’ll live out (most of) my year-long lease at this apartment!

Oh, and while we were moving things in, I saw three cats wandering in and out of my yard, which I interpret as a VERY good sign. 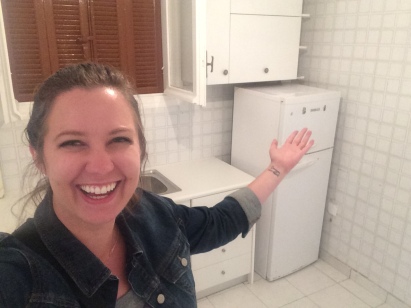 One thought on “A Week in Greece #15: A New Friend, First Week at HD, and Apartment Furnishing”