It’s crazy to think that this might have been my last week in Athens, full stop.  I’m so glad I decided to stay another year – I’m happy to postpone this depressing possibility for later!

I actually tried to give myself a lot of downtime this week, knowing that I would be mentally exhausted.  Work went much better than I assumed; we had a lot of meetings to prepare for the next month (and we’ve already scheduled three meetings for the first week I return) but the day to day work wasn’t overwhelming.  It was actually pretty fun!  On Thursday, we went to Jumbo to buy Christmas decorations, and on Friday, we put up HD’s first Christmas tree!  We all wore silly Christmas hats, sang to American and Greek Christmas songs, and ate a lot of cookies as we put up ornaments and lights.  One woman had been sick all week, but she came in specially on Friday to say goodbye to me, which was very sweet!

Outside of work, I mostly did things on Wednesday (the ceremony for the texts of terror in the Bible, described in an earlier post) and the Revelation Bible study that this week went until midnight.  Then I had a massively busy weekend!
It started on Friday, when Olga called and asked if she could stop by.  When she got to my apartment, she asked if she could spend the night and had a bag already packed, hahaha.  We stayed up talking and catching up, and then on Saturday morning we both left.  I went to meet up with Dina and Argyris for brunch at a super fancy restaurant in Kiffisia.  They ordered way too much food and forced me to eat more than I could handle, and they showered me with compliments and made me feel really great about coming back to HD next year.

They dropped me off at my house at 2:00 p.m., half an hour before Luciana and Giorgos came over to transport Hans Harrison to his holiday destination.  Unfortunately, HH remembered the trauma of the cat carrier, and he mauled my arm in desperation.  As soon as I would stop shoving him at the case, he would curl up in my lap in trust, which was a very effective way to make me want to stop forcing him in.  Luckily, Giorgos and I teamed up and wrapped him in a blanket to stop his legs flailing and got him in the carrier. 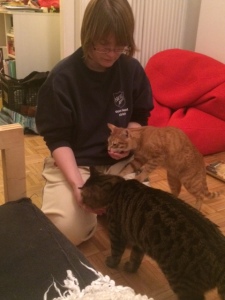 Because they transported HH, they got to meet Rosie, and my plan to start combining my friend groups began (just before I leave, perfect)!  They left, and then Rosie and I met up with Kendra and headed to Mercy’s Christmas party.  There was an enormous amount of sweets and drinks and games, and I was super grateful that I got to do a Christmas party in Athens before leaving. 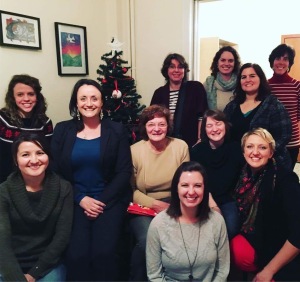 I spent the night at Rosie’s, both because of the convenience of staying downtown, and because Hans Harrison was there and I wanted to be with him as long as possible.  In the morning, we met up with a bunch of friends to skip church and go to the Anglican Bazaar, which had loads of really nice used books for 50 cents each.  It was cutthroat, with little old ladies elbowing us out of the way, and me using my long arms to snatch books from over people’s shoulders.  I came away with eleven books for 5.50 euro, though, so it was totally worth it! 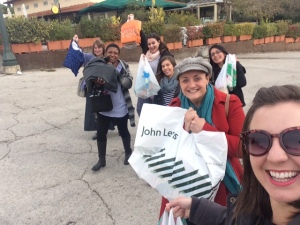 We headed to 2nd Church for the women’s meeting where Kendra was speaking.  There was a massive lunch first, and she spoke about Leah, the unwanted sister, and how in both secular and church cultures, women are so often made to feel less-than.  She did an amazing job, and women opened up about their stories a bit, and it was just very lovely.

After that, we went back to Rosie’s to hang out for a bit.  I cuddled with Hans Harrison one last time, and then I came back to my house at 6:00 p.m. to clean and pack.  I’m mostly done with that now, so I’ve just got to wait until about 10:00 when Luciana is going to come over and say goodbye, go to sleep, and then wake up early to head to France!

Five days in France for debriefing, then I’m back in the States for a month!  Honestly, right now I’m not excited.  I’ve been having so much fun here, both at work and socially, and I feel like I’m finally starting to find that group of friends that I can call to do anything/everything.  It sucks to leave all of that!  But I know that when I get home I’ll remember all the amazing people there and it’ll be okay.