This week was EXHAUSTING.  By the end of the week I felt like I’d worked double, which is weird because the week actually started with a holiday!

Clean Monday is the Greek start of Lent.  My roommates and I got the traditional bread and halva to eat for breakfast, and then we went out to the fancy park coffee shop because our stolen wifi isn’t working.  It was a lovely lazy day, and the end of my peace.

The reason work was so crazy was because of a really good thing:  we’re all finally officially moved into the new offices.  This means there are people around all the time, which is SO GREAT, but it also means there are people around to give you more tasks to complete.  We had a staff meeting on Wednesday that went on forever – tensions were high and there were five million things to address because we’ve been in separate places for so long.  Plus I’m feeling stressed because it’s only one month until I have to leave Athens (no visa progress) and I’m trying to prepare the Day Program for every eventuality.

I got through the week by hanging out with Luciana literally every day.  On Tuesday, we took a long late lunch, then got sweets at a bakery.  While sitting outside, a man next to us said, “Is that an American accent?  Do you mind if I ask how you feel about your recent election?”  He was a (married) Welsh guy who’d lived in the States for a bit, and we three had a half hour long conversation about politics.  Flash forward to my weekend with a Greek and an Englishwoman where we also talked about politics.  I really like living in Europe.  The US is so geographically isolated that it’s easy to selfishly think only of ourselves.  But living here in a jumble of neighboring countries, people are so politically aware of not only their own country’s positions, but of others’.  I like it a lot.

Back to Luciana.  On Wednesday we stayed super late at work, then finally went back to my place where I cut her hair and we watched another episode of Coffee Prince (NOPE, I’m still not done talking about this Korean drama).

On Thursday, we had our Graduation Ceremony at HD.  I’m in charge of them now, so I was Happy and Excited and Welcoming of All Our Guests!  I was absolutely exhausted by the end of it, and I didn’t want to go home because one of my roommates was hosting a Bible study and I didn’t want to say hello to any more strangers.  Luciana invited me to her place, and Giorgos immediately said, “What’s wrong with you?” when he saw me.  “I’m introverted out,” I said, and he nodded in understanding and fed me an omelette.  “I know you will understand this as a compliment,” I told them both, “but I feel alone with you guys.  Thank you!”  Luciana then suggested we start watching another episode of Coffee Prince, half to see some emotion in my eyes, and half because she was starting to fall in love with it.

On Friday, we had a big HD board meeting that went on forever, and afterwards Giorgos had to stay in the office working on techie stuff, so Luciana and I watched another two episodes of Coffee Prince until 11:30 p.m.  I am so happy that she is as big a nerd as I am.

On Saturday morning, Anthi and Rosie and I fled to Thessaloniki!  We spent the whole weekend walking in the sunshine by the sea and eating bougatsa and souvlaki.  We all were similarly interested in being lazy, so we only went to one (very nice) museum in the White Tower.  Otherwise we just wandered and ate!

Rosie imposed a really great rule that if we talked about work-related topics for more than five minutes, she would cut us off and ask us a random question.  These ranged from “If you could introduce any animal into Athens, what would it be?” (Answers:  panda bears, koalas, and lemurs) to “If you had to kill off 90% of the world’s population, how would you choose who to kill?” (Rosie:  You’re really into the dark questions, Tricia.)

I had a wonderful time with them both, and almost as soon as we got there, we were planning our next trip.  But not seriously, because I’m leaving soon, and I don’t know when I’ll get to come back!  *weeping* 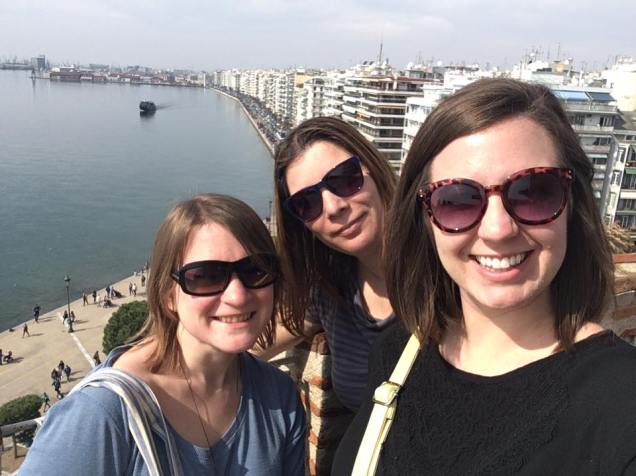 One thought on “Year 2 | A Week in Greece #8: A LOT OF LUCIANA and THESSALONIKI”