Did I honestly say that I wouldn’t write more about Black Sails after watching the final series of the show?  Don’t listen to that idiot from three days ago, she was delusional to think that there wouldn’t be More Feelings to share at the end of it all.

Less than 24 hours after spending a week devouring 38 hour-long episodes, I have a thesis statement for the show:  Oppressed people groups are easily villainized, because the only options they have to claim their freedom are so often monstrous.  The pirate world we are shown – full of orphans, criminals, lower class men and women, queer men and women, and slaves – all just want to get away from the civilization that abused them.  But the only way they can escape is with money, and the only way they can get money is by stealing it.  And when “civilization” tries to remind them of their place at the bottom of the world, well, there just might be some bloodshed. 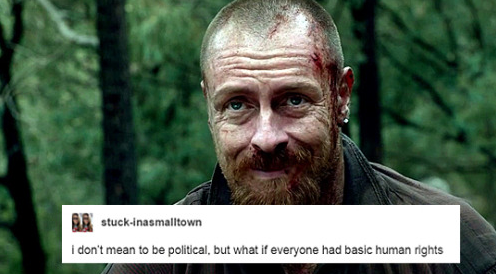 But in the pirate world of Nassau?  Queer men and women can be business moguls and pirate captains.  African slaves can be princesses and revolutionary leaders.  Crippled men can be pirate kings.  And working together, they might just threaten to topple the regime that ostracized, shamed, and punished them.

I found this fanvid that perfectly summarizes the beauty of Black Sails.  While “We live in a beautiful world” is hauntingly sung, we see all the moments of pain and violence that our beloved characters go through.  That contradiction is the core of the show – that horrors must be endured, or even perpetrated, but all in the desperate hope that there is a beautiful world of possibilities and freedom worth fighting for.

I still cannot believe that a Pirate Show chose to make THIS a central premise of their story.  Oh my word, Black Sails went so far beyond any of my expectations.  If anyone reading this does decide to start watching, please know that season 1 is the equivalent of an M&M: tasty, but whatever.  Seasons 2-4 are a 64-oz chocolate bar that will change your world.

Even though I had to watch a lot of it through my fingers…wow.  What an astoundingly lovely television series.