When I was in seventh grade, my older brother invited me to see The Fellowship of the Ring on opening night with a group of his friends.  They invited one other younger sibling in an attempt to set us up.  I did fall in love that night, but not with the other seventh grader.  My heart was 100% stolen by the beauty and power of The Lord of the Rings.

This love affair has never really stopped.  I don’t really know how to adequately describe the depth of my obsession with Middle-earth.  I could say that I watched each film four times in theaters.  Or I could mention how I cried so hard during The Return of the King that I ran out of tears, only to go home and cry myself to sleep while listening to “Into the West.”  I’ve read through the series at least seven times, and The Silmarillion four times.  I own multiple Lord of the Rings-inspired t-shirts and jewelry (including, yes, the One Ring on a necklace), and I’ve sat through a marathon of all three extended editions twice, once in college and once last summer.  But maybe the most obviously obsessive thing I’ve done is create a three inch binder full of scrapbooked Lord of the Rings pictures, quotes, and memorabilia. 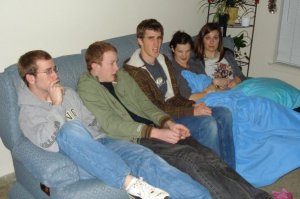 [The college marathon, interrupted by my roommate’s engagement, which was exciting and all, but….we were right in the middle of Return of the King!] 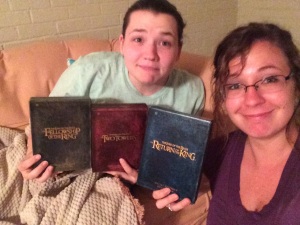 [Last summer’s marathon, after which Mallory and I stayed up another hour discussing all the ways the story hurt our hearts.]

I was obsessed, I am still obsessed, and I think I will always be obsessed.  The stories of Middle-earth have been internalized to such a degree that I honestly think its worldview affects the way I make decisions.  Lord of the Rings taught me that heroes are not always obviously heroic; sometimes, like Bilbo, they are small and ill-prepared.  Sometimes, like Frodo and Boromir, they fail, but those failures do not invalidate their heroism.  I learned that the first step out of your door is the hardest one, but as you continue along your adventure, the discomforts fade away as you befriend new people and see things you never even knew to imagine.  I know now that friendship is powerful and that you cannot go through life alone.

Most of all, though, I believe that hope in the face of darkness is one of the most important things in life.  I do not want to be like Saruman or Denethor, who saw the growing might of Sauron and despaired, falling into corruption and betrayal.  Instead, I want to be like Gandalf, like Aragorn, like Faramir, like Sam, like Frodo–I want to stare into the darkest holes of life and say, “I will continue to fight.  We may yet defeat this evil.”

This clinging to hope has manifested itself in various ways throughout my life.  I was depressed in middle school, and I often prayed that God would kill me because I did not want to live.  I wonder, now, if things might have gone drastically wrong were it not for the intervening appearance of Lord of the Rings in my life.  Sometimes I am overwhelmed by the weight of singleness, wondering why seemingly everyone on the entire planet has found someone to love them except me, but then I remember that there are larger journeys to walk while waiting, like Arwen and Aragorn.

Most recently, as I prepare to move to Greece, I find myself thinking often of Bilbo and Frodo.  I am just one person, and an insignificant one at that–who am I to walk into the evil of sex trafficking and make any difference at all?  When confronted with the Ring, Frodo said, “But I feel very small, and very uprooted, and well–desperate.  The Enemy is so strong and terrible.”  Yet later, amongst many people who were perhaps better qualified to make such a dangerous journey, it was Frodo who said, “I will take the Ring, though I do not know the way.”

That leap into the darkness, into danger and the unknown, can only be made with hope.  Now, I’m no Frodo, and life is not The Lord of the Rings.  However, I take such encouragement from his story and its reminder that hope is not stupid, no matter how overwhelming the evil I face.

The Road goes ever on and on
Down from the door where it began.
Now far ahead the Road has gone,
And I must follow, if I can,
Pursuing it with weary feet,
Until it joins some larger way,
Where many paths and errands meet.
And whither then? I cannot say.

Are you in love with the stories of Middle-earth?  How have they impacted you in real life?

4 thoughts on “Hope in Lord of the Rings”