When I was twelve years old, I fell in love with Fight Club.  The plot blew my teenage brain, Brad Pitt was overwhelmingly attractive, and the anarchist violence appealed to something some dark part of me.  I watched the movie four times in a week before my mom realized the content of my latest obsession, and she forbade me from seeing it again.  It was too late.  The movie was deeply ingrained in my psyche.

Fourteen years later, I sat on my bed at a Bible College in Greece when my American roommate said she was going downstairs to a fight club.

“Yeah, we have a fight club,” she insisted.

She led me to the student lounge downstairs where the couches had been pushed against the walls and two college students stood in the middle, putting boxing gloves on their hands.  Seeing my wide eyes, one of them asked, “Have you ever boxed before?”

“I’ll teach you,” George said, but I insisted that I was only there to watch.

He sparred with a girl for a while, but it was clear he was going easy on her.  Another girl took her place, and the fighting escalated in both hilarity and violence.  Every time a punch made it past someone’s guard and their head snapped back, the other boxer would lunge forward to cling to her friend’s shoulders and make sure she was okay.  Half the time this was met with a shaky nod, and the rest of the time the stunned person would attempt to suckerpunch her adversary.

George pointed at me from across the room with his eyebrows raised.  I grinned slowly.  “Yeah, I wanna do it.”  My roommate patted me on the leg.  “You’re going to love it,” she assured me.

George taught me a basic stance and how to throw a punch with my left hand, then with my right.  “You’re going to get tired of me telling you to get your guard up,” he said.  “Get your guard up.”

Punching his raised gloves was fun.  But when he taught me how to throw a hook and put his glove against his head, I laughed out loud, slamming my fist at his ear.  “You like this?” he asked.  “Oh my gosh, yes,” I gasped.  If he moved his glove, I would punch him in the jaw.  I wanted to punch him in the jaw so bad.

A couple years ago I realized that, despite a lifetime of believing I do not experience anger, what I was actually experiencing was repression.  I am full of anger, but I rarely let it out.  Someone consenting to let me punch them repeatedly revealed and released my deep-seated well of rage.

After a couple more minutes of practice on my form, George asked if I was ready to spar.  We circled each other, and I quickly moved in and slammed into his defended face–right, left, then between his gloves to make contact with his face.  He shook his head as though to clear it and raised his eyebrows.  I grinned hugely.  He came at me and I blocked a couple punches.  “You’re pretty good,” he said.  I punched him in the ribs.

He was clearly going easy on me, letting me get in twenty punches for every one he took.  “Keep your guard up!” he said as his glove slammed into my forehead.  “Did I get you?” he asked.

“No,” I realized, though I didn’t know if the lack of pain was from adrenaline or a deliberately weak punch.  Then I threw myself at him again, getting close and trying to land as many hits as possible.

“Keep your guard up!” he said, swinging at my head.

“I don’t usually do anything physical,” I panted, ducking back.  “I’m tired.”

My wolf grin returned.  I charged him, punching right, left, head, ribs, laughing as he covered his face.  My arms gave out, and I backed away.  “Thank you,” I wheezed.  We fist-bumped boxing gloves.  I ripped them off, then fell onto the couch, suddenly remembering that the room was full of other people.  I felt light, free, and uncomplicated.  I felt powerful and so so good.  My blood was pumping and my heart was racing.  I was sweating, and I had punched a guy in the face multiple times.

I had participated in a fight club.

My inner twelve-year-old so was proud. 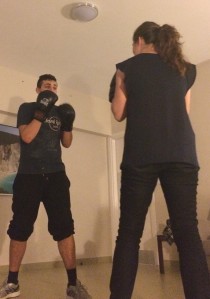