Eight people spending a three day weekend together can be a recipe for disaster.  Staying in a single bedroom with four double beds while sharing a tiny kitchen and tinier bathroom makes it even more likely to fall apart.  Anticipating a sun-filled weekend of outdoor play only to experience cold rain ought to have been the final straw.  The fact that these seven friends embraced the disappointment and close quarters with grace and humor is exactly why I love them so dearly.

The eight of us shared a single bedroom packed tight with four double beds.  This meant cramming our bags into crannies, negotiating clothes-changing schedules, and me gleefully exclaiming about the joys of sleepovers.

One of those joys being snorers, since at least three people filled the room with deep breathing and ragged exhales.  Of course, the snorers were also the ones who fell asleep the fastest, so after the snoring started, other noises started up:  snickers, loud coughs, and the dull thud of snorers being punched in the arm.  Once I finally fell asleep, I was always woken by the 80% of our group that were early risers.

But I found all of this delightful!  There’s something so fun about sleeping in a big room full of the people you love.  Each night, as we decided to go to bed, we moved ten feet, from one room to another, the only change being that we were now horizontal instead of vertical.  I also love waking up with people, watching the slow stretches and the half-lidded eyes. 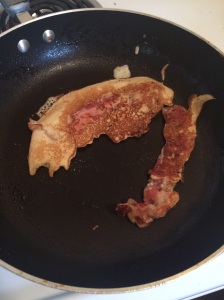 I like seeing my friends at their most vulnerable, as they reacquaint their bodies with the reality of being awake.  It’s so intimate and lovely.

Emily had planned ahead and brought enough food for our lunches and dinners.  On the first night, we divvied up food responsibilities, and everyone took part in cooking, serving, and cleaning up.  James was the egg king, David served up some delicious bacon, and Joe ruled the grill.  For my part, I made watery pancakes.  Once everyone was fed, I fulfilled my recent obsession by teaming up with David to make pancacon.  After two test runs (shown to the right), we finally discovered the glory of a pan-sized pancake with three slices of bacon embedded, slathered with syrup and rolled into a breakfast burrito.

We had anticipated a sunny Memorial Day Weekend, but instead we got rain.  This drastically affected our float trip (read more about that here), but it also meant we were stuck in our cabin for most of the weekend.  Rather than go stir-crazy, we brought out the dozens of games we had packed.  We played board games and card games, long games and short games, word

games and puzzle games, funny games and strategy games.  We played old favorites like Jungle Speed and Fishbowl and new favorites like Alternate Universe and a new Ghost round of Fishbowl.  We spent hours and hours around the little table, laughing and learning and snacking and screaming.

The short way to describe the McMontongers is that we felt like family.  Everyone worked together well because we know each other, trust each other, and like each other.  I ripped one of my contacts the second day, which meant I was doomed to walk around half blind or else wear my glasses for the rest of the weekend.  When I complained loudly about this, Ashley offered me one of her spare contacts.  “I can’t do that!” I insisted while taking it from her.  “You saved my life!  You’re so wonderful!”  She shrugged it off, because she is amazing.

When we got back from the freezing float trip, all of us desperately wanted a hot shower.  Instead of fighting for first dibs, we got out sandwiches and games and waited patiently as each person took a short but heavenly shower.  Honestly, I don’t know how we didn’t fight over the bathroom at some point in the weekend, but we never did.  In another example of easy accommodation, Daniel lost his phone during our float trip.  The next day we drove half an hour to the nearest Verizon and sat in the car for another half hour while he bought a new one.  No one complained, because we love Daniel and we wanted him not to stress during the rest of the trip.

One of the moments that most solidified my love for these friends was the evening of the third day.  I had spent all weekend insisting that I wanted to go hiking and see the sun set.  Unfortunately, it kept raining.  But that night, Emily, Ashley, and Abby decided that we would go looking for a sunset.  The rest of us put on rain coats and grabbed umbrellas.  We walked down two dead ends, stared at the grey cloudy sky, then hiked back to our room to change into dry clothes.  It was entirely pointless and absolutely delightful.

Leaving was made slightly less awful when it was suggested that we all cram into one car and rock out to our weekend anthem, “Shut Up and Dance.”  Joe and Daniel took the front seats, and the other six of us squeezed into the backseat.  We spun the volume high and screamed, “Don’t you dare look back, just keep your eyes on me.”  Three minutes and nineteen seconds later, we slid out of the car, shared hugs, and then I drove away.

Emily and Joe, Daniel and Ashley, David, Abby, James.  These are seven of my favorite people.  They are friends, and they are family in my heart.  There is no one else I would rather spend a rainy weekend with.