Despite my love of Indian people and Indian food, I have never been very interested in visiting India.  Unfortunately, Macdonald didn’t convince me to change my mind.  Sure, I loved reading about her growing appreciation for the chaos and contradictions of India, but I’m content to let that be her story and not mine.

The book is interesting, but a little awkward.  Some chapters detail her personal life (losing her hair, nearly dying of double pneumonia, meeting Bollywood superstars), while others chronicle her pursuit of religious experiences.  I liked both, but the book as a whole didn’t feel cohesive.

Since India is the birthplace of a huge number of religions, it makes sense that Macdonald, previously an atheist, would take advantage of her new life to explore the realm of the spiritual.  I enjoyed learning about Sikhism, Zoroastrianism, Hinduism, Islam, etc alongside her.  But, like many spiritual explorers, she tends to highlight the pros and ignore the cons.  In the end, she wants to take a little something from each religion, and she never stops to discuss the fact that this belittles many of the religions that claim this picking and choosing is impossible.  It felt like she didn’t want to offend anyone, which, while understandable, doesn’t exactly make for persuasive writing.

I’m always down for a book that explores the topics of travel and religion, and I’m glad I spent time reading Holy Cow.  But I don’t think I’ll be rereading anytime soon. 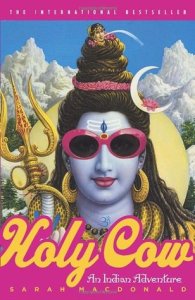 In her twenties, journalist Sarah Macdonald backpacked around India and came away with a lasting impression of heat, pollution and poverty.  So when an airport beggar read her palm and told her she would return to India–and for love–she screamed, “Never!” and gave the country, and him, the finger.

But eleven years later, the prophecy comes true.  When the love of Sarah’s life is posted to India, she quits her dream job to move to the most polluted city on earth, New Delhi.  Holy Cow is Macdonald’s often hilarious chronicle of her adventures in a land of chaos and contradiction, of encounters with Hinduism, Islam and Jainism, Sufis, Sikhs, Parsis and Christians, and a kaleidoscope of yogis, swamis, and Bollywood stars.  From spiritual retreats and crumbling nirvanas to war zones and New Delhi nightclubs, it is a journey that only a woman on a mission to save her soul, her love life–and her sanity–can survive.