BuzzFeed recently introduced me to the the existence of @firstdateqs, a Twitter account where people are revolutionizing first dates.  Throw out questions about careers and families of origin and ask the truly important ones, like, “Do you think birds hear their own voices and are like ‘ugh is THAT what I sound like?'”

I’ll be honest, I would be super impressed by a guy who brought his creativity A-game to the restaurant.  So, just to practice, I thought I would answer a few.

“What’s the biggest piece of food you’ve dropped in the kitchen and then kicked under the fridge instead of picking it up?”

A carrot.  But only because the heel of bread that fell wouldn’t fit.

“If aliens are real, how disgusted do you think they are with you?”

If they can see inside my car when I assume I’m alone, then….pretty disgusted.

“How many times have you brought an entire bottle of wine into the shower?”

Never.  But that’s going to change tonight, because you’re a genius.

“How many times have you tried communicating with a dog just to see if you could?”

Let’s just say I like to think my superhero name would require dealing with Dr. Doolittle’s copyright laws.

“Do you think if you lost all your teeth you’d just eat healthy smoothies or would you, like, grind up chicken nuggets.”

The first three days would inspire the pickiest foodie, and then I would quickly devolve into filth.

“Do you think bugs have best friends?”

I HOPE SO, and thank you.  You’ve changed everything I’ve thought about the insect world. 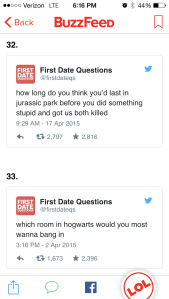 “How long do you think you’d last in Jurassic Park before you did something stupid and get us both killed?”

Oh, right away.  I would immediately try to pet a velociraptor out of a naive assumption that love can tame the wildest beast.  Hopefully that love would earn a quick death, though.

“Which room in Hogwarts would you most wanna bang in?”

How would you answer these questions?  And do you think first date questions should stick with the basics or branch into the creative?  Leave a comment and let me know!