I get to work as church secretary for Woodland while the official secretary is on maternity leave.  This is merely the latest in a long line of jobs I’ve had here, and I’ve learned things from each one.  For instance, when I taught piano lessons, I learned that sometimes you’ve got to let a kid run around the room for ten seconds when he gets increasingly frustrated with a difficult melody.  But for all the things I’ve learned while working at Woodland, I’ve learned far more simply from jumping into the activities and relationships found with this group of people.  Below are four valuable life lessons I learned while at Woodland.

I learned that people will think you’re funny if you make fun of yourself. 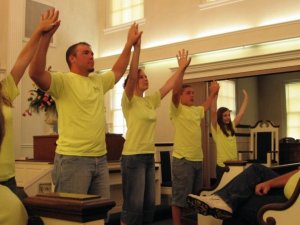 Every summer, our church had a Sunday night service dedicated to letting people talk about whatever mission trips in which they had participated.  My junior year of high school, I went to the front to talk about how, during a World Changers event, Pam volunteered our HOPE group to do a sign language performance.  This normally wouldn’t have been a big deal, but at this particular World Changers, I had been flirting with a boy, and the song she wanted to perform had me in the starring role.  I hate performing, and the idea of waving my arms around–and baring potential pit stains to the cute boy–horrified me.  When the song was over, I realized with intense gratitude that my shirt was totally dry.

This is the story I told my church, as evidence of God’s love and kindness.  There was a pause after I delivered the punchline, then some snorts of laughter burst from the audience.  After the service, one little old lady congratulated me, both on my lack of pit stains and on my ability to speak in front of crowds.  Although I try not to include stories of sweat stains in my public speeches anymore, it was a valuable lesson in not taking myself too seriously.

I learned that friendships are solidified by traveling together. 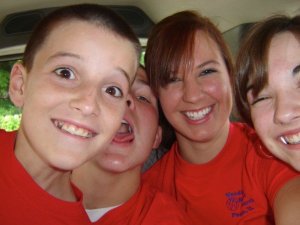 Speaking of mission trips, I’ve been going on them since I was six months old.  One of my earliest memories is from Nebraska, when Shelly played and sang “Froggy Went A-Courtin'” on his guitar.  Every summer 50-70 members of our church packed up our cars and drove around the country to do Vacation Bible Schools and construction work.  We went to Wyoming and Wisconsin, Kentucky and New York.  It never really matter where we went, because it was guaranteed fun no matter what.

There’s something about taking your normal group of friends and transplanting them in a new place, doing new jobs, eating and sleeping and living together, that really bonds a group.  One of my favorite mission trips was to Clifton Parks, NY when we rented a huge house to stay in.  Instead of our normal motels, this place was all ours.  Families were assigned bedrooms of varying sizes, sometimes having to share bathrooms with other people.  We all ate in a giant dining room.  At night, we gathered in the same room for cards and conversation.  I snuck around the back hallways, exploring and flirting with friends.  By the end of the week, I was desperate to stay, re-convinced that these people were my absolute favorite in all the world.

I learned to take responsibility rather than lean on a stereotype. 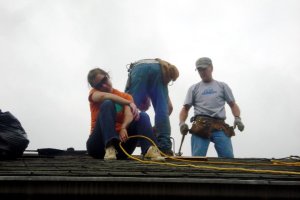 At a mission trip in Pennsylvania, I was put on a roofing crew.  I love being on these crews, because I consider them the Cool Kids of the church world.  The only problem is that I’m scared of heights, and running around a rooftop (even the low-pitched one we were assigned) looks more like…scooting.  I scoot across rooftops on my butt for at least the first day.  By the end of the week I’m on my feet, although nowhere near the edge.  Obviously, this can seriously affect one’s ability to do meaningful work, but I managed to be useful by sitting next to the stacks of shingles and tossing them to the people nailing them in place.

One afternoon, Ashley came to sit beside me.  The work had died off a little, and we were all moving slowly.  Ashley and I chatted, joking and tossing shingles when necessary.  A guy from the church we were helping came to our site and climbed on the roof.  He looked at Ashley and I sitting down while the men on the crew continued to work.  “Leave it to the men,” he said, nodding in our direction.

“Hey!” I retorted.  “I’m incompetent because I’m incompetent, not because I’m a woman.”  I looked at Ashley, who immediately caught my drift.  She stood up, wandered to the edge to grab a nail gun, and took her place nailing shingles down with ease.  Girls can do whatever they want, but I cannot do all the things girls can do.

I learned that if you wish something existed, you should make it happen.

When I moved home after growing up in college and in Senegal, my brain was full of ways to make Woodland better.  At Wendy’s house, I complained to her about our lack of multi-generational Bible studies.  “Everything is about age!” I whined.  “I want something where I can learn from people older than me, and I want younger people to feel like they have something to contribute to the conversation.”  Wendy patiently listened until she cut off my rant.

“Tricia, if you want this to happen, why don’t you start it?” she said.  I made excuses.  She refused to acknowledge them.

Two months later, I started teaching a women’s Bible study.  We had about twenty women there every week, aged 18-80.  It was one of my absolute favorite experiences, and I was so glad that I had stopped complaining and started doing.