The other day I listened to a playlist for the first time in two years.  It’s the playlist I made when I nannied Anju and Ketan, full of songs we would sing to while driving to all of their extracurricular events. 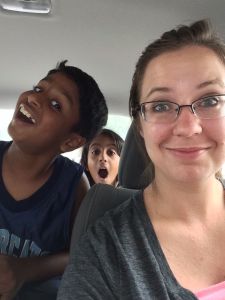 Some are obvious kid’s songs, like all of my favorite Disney ballads.  But our real favorites were pop songs that were current at the time, especially Imagine Dragons and Bastille.  I still remember turning around in my seat to high-five Ketan when he mastered singing “Flaws” with a British accent.

One of the songs that came up was “Everything Ends” from A Very Potter Senior Year, because yes, I did introduce my pre-teen charges to the amazing world of the sometimes inappropriate, always hilarious college production of Harry Potter musicals.  This particular song is from the end of their third musical, and it’s doubly upsetting because it’s about Harry using the resurrection stone to see his dead friends and family one last time AND it’s about the cast acknowledging that Darren Criss’s life has taken him away from Starkid.  I’ll put the video here if you want to cry a little.

The lyrics hit me, listening to a playlist from my past, thinking about my Dallas life and all the people I’ve said goodbye to, and hello to, in just two years.

Group Singing:  You can’t hold on to what’s gone.
Don’t try to fix it, just move on.
Only then, you’ll see the world all brand new.

And I felt…really great.  I tend to cling to the past, to hoard memories and wish for things to be as they were.  But there’s something so peaceful about saying, “Yes, the past WAS great, but so is the present, and so will the future be.”  I don’t get to sing with Anju and Ketan in the car anymore.  But this week I got to paint fingernails and watch Dirty Dancing: Havana Nights with women who have been trafficked.

Life isn’t about holding onto things or trying to recapture experiences.  You’ve got to move on, and see the world all brand new.

I get to work as church secretary for Woodland while the official secretary is on maternity leave.  This is merely the latest in a long line of jobs I’ve had here, and I’ve learned things from each one.  For instance, when I taught piano lessons, I learned that sometimes you’ve got to let a kid run around the room for ten seconds when he gets increasingly frustrated with a difficult melody.  But for all the things I’ve learned while working at Woodland, I’ve learned far more simply from jumping into the activities and relationships found with this group of people.  Below are four valuable life lessons I learned while at Woodland.   END_OF_DOCUMENT_TOKEN_TO_BE_REPLACED

I spent the majority of my first eighteen years at Woodland Baptist Church.  For better and for worse, it is the place that has most shaped me into the person I am today.  Now that I’m back for six months, every hallway and classroom reminds me of something from my past.

After my half day at kindergarten, I went to Woodland and hung out in the supply closet while my mom worked as preschool director.  One particular day I found the colored paper, and my burgeoning creative genius decided to cut them, twist them, and staple them into nonsense shapes.  Thrilled by my abstract accomplishments, I gave one to the church secretary, one to the pastor, and one to each of the preschool teachers.  Because they were kind, they complimented me.  That was a bad move on their part, because I made fifty more.  END_OF_DOCUMENT_TOKEN_TO_BE_REPLACED

This weekend, my cousin Bess came to Dallas to visit me.  We spent her first night here watching all three Jurassic Park films in anticipation of Jurassic World‘s release.  I chose to view our immediate fixation on movies in a positive light:  our family is very media- and story-oriented, so really, we were honoring our ancestry.  After all, this was not the first time movies were central to my memories of Bess.

When I was very little, I loved the Ernest movies starring Jim Varney.  So did my brother Roy and my cousins Andrew and Bess.  One night when we were visiting them in Atlanta, we rented Ernest Scared Stupid, in which Ernest must destroy a bunch of trolls on Halloween.  It is the most absurd film to ever exist, culminating in Ernest dancing and kissing said evil troll.  The four of us peered over blankets, laughing as though we weren’t actually terrified.  I vowed never to watch a scary movie again.  END_OF_DOCUMENT_TOKEN_TO_BE_REPLACED