Day 16: Expecto patronum! What form does you patronus take and why?

I took the Patronus quiz on Zimbio and they said my patronus is a wolf!

I’m not sure I would have chosen that on my own–the quiz assumes I’m far more of an assertive leader than I really am.  However, those ARE qualities I am trying to develop in myself (much like I think I earn my spot in Gryffindor by wanting to be brave more than I actually am).  So I’ll take the wolf!

The more I think about this, the better it is.  Imagine a swarm of dementors attacking, shouting “Expecto Patronum!” and a silvery wolf appears, leaping at them and snarling to keep them away.  I can’t imagine a better patronus.

If I hadn’t taken the quiz, I might have said a cat.  Not so much to fight dementors, but just like, for a peaceful companion.  But I already have a cat companion, so I guess a wolf patronus would balance things out.  One for fighting, one for resting.

Easy!  A Very Potter Musical, which I have already written an entire blog post about.  It’s hilarious and incisive while remaining a love letter to its source material, and it launched Darren Criss into deserved stardom.  Some of the songs are eerily insightful, like one of my favorites, “To Have a Home.”  And it gave the world so many amazing quotes, like “Super mega awesome foxy hot” and “You think that killing people will make them like you, but it doesn’t.  It just makes them dead.”

Runner up (a very close second!) goes to The Shoebox Project for giving the world a novel-length look at the Marauders time at Hogwarts. 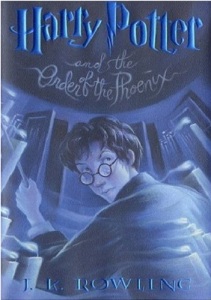 Even though the “worst” Harry Potter book is still one of my favorite books of all time, I would definitely put The Order of the Phoenix at the bottom of my list.  The beginning is slow, and whiny Harry really got on my nerves the first time I read it.  Later I could appreciate Rowling’s insistence on portraying her protagonist as an actual teenage boy, but….it still doesn’t make for fun reading.  I really liked the Department of Mysteries ending, and while I HATE that Sirius died, I also love that characters are not above danger.  Look, I somehow got into listing things that I like about HP5, so clearly “least favorite” has very little weight.

Day 19: Do you prefer the books or films?

I once heard this comparison described as follows:  The HP movies are like eating an M&M.  It’s delicious and enjoyable.  But the HP books are like eating a 64 oz. chocolate bar.  You can gorge on the feast, and suddenly that little M&M doesn’t seem quite as appealing.

They’re both delicious, but I choose the books 100% of the time.

Day 20: If you got to meet one member of the cast, who would it be?

Daniel Radcliffe.  He seems grounded, despite his world-famous status at a very young age.  And he seems really weird, so he would be so much fun to hang out with!

But then there’s Emma Watson!  I think we would have a lot in common; we could discuss HeforShe and I would ask her what it’s like to work with Ewan McGregor (in the new Beauty and the Beast movie).

Ooo and Emma Thompson!  And Dame Maggie Smith!  I mean, really, this cast is golden from oldest to youngest.  I would just probably not want to hang out with Michael Gambon, since I heard he didn’t even read the books after being cast as Albus Dumbledore.

Day 11: Which character would you say you are most like?
Day 12: Favorite ship?
Day 13: Your least favorite movie?
Day 14: Team Voldemort or Team Harry?
Day 15: Pick three characters to be your best friends at Hogwarts?