Oh noooO!!!  Too many feelings.  This review is going to be less intelligent and more an emotional outpouring of OH MY GOSH THIS BOOK.

I mean, the premise is fantastic.  Harry August lives his life, dies, and…is reborn.  As himself, same parents, same place, same situation.  But he remembers everything of his life before.  It turns out there are other people like him, and this is the story of how these men and women influence the world and each other.

It’s super cool and fascinating, and the structure allows for some amazing questions.  There’s the run of the mill immortal quandary:  What do you do to keep life interesting if you’ll never die?  Harry becomes a scientist, doctor, engineer, world traveler, etc.  He learns everything, he meets everyone, he gets married a few times in different lives to different women.  He is captured, tortured, and dies in a whole bunch of different ways.

But the more interesting question that can only be asked within this plot setup:  What morals are you held to if you know that no matter what you do, you will be reborn, the world reset and no one really harmed?  Harry kills a couple people, for varying levels of intelligible reasons, and in his next life, there they are again, unchanged and unremembering.  Does murder, then, really matter?  Does love?  SO INTERESTING, you should read it.

The really remarkable thing about this book, however, is that the fascinating setup is soon eclipsed by one of the most interesting relationships in all of literature.  Maybe I’m exaggerating because of, as I said before, omg all the feeilngs, but Harry and Vincent wrenched my heart.  Vincent is like Harry, reborn into his life over and over again.  They are best friends, worst enemies, and in every life they make me crazy.  Perhaps it is because the stakes are so much higher, their friendship feels epic.  They hate each other almost as much as they love each other, and their intelligence and lifetimes of experience make them equals in deception and manipulation.

Although the book ended in the only way that is really acceptable, I find myself desperate for an alternate ending.  I want MORE. 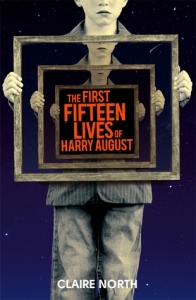 Harry August is on his deathbed.  Again.

No matter what he does or the decisions he makes, when death comes, Harry always returns to where he began, a child with all the knowledge of a life he has already lived a dozen times before.  Nothing ever changes.

As Harry enters the end of his eleventh life, a little girl appears at his bedside.  ‘I nearly missed you, Doctor August,’ she says.  ‘I need to send a message.’

This is the story of what Harry does next–and what he did before–and how he tries to save a past he cannot change and a future he cannot allow.