I have been friends with Lindsay Wineinger (formerly Lindsay Davis, which I still accidentally call her, five years after her wedding) since we were practically babies.  Actually, she was a toddler, since she is two years older than me.  For most of my childhood, that mattered, because I looked up to her as being the coolest person ever.  When I joined the church youth group as a teenager, I realized that while she is definitely cool, she’s also got a weird sense of humor, which meant I had a shot at being her friend.  I love Lindsay for her passion (she cries when talking about what Jesus has done for her), her sense of adventure (I always describe her driving as controlled chaos), and her loyalty (I once broke her glasses by stepping on them while she was in middle-of-nowhere Africa, and she is still my friend).  Lindsay is one of the most compassionate people I know (even though she thinks she isn’t), and I know I can always count on her to celebrate and/or mourn with me.  I have loved our fifteen years of friendship, and I look forward to seventy more.  We’re going to rule whatever nursing home we wind up in. 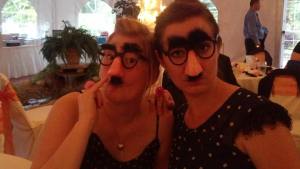 Lindsay and Tricia grew up in central Illinois, where they attended the same church but different schools.  They became friends as two parts of the Fabulous Five (self-named, but still true).  They went to different colleges, but their friendship remained despite the distance.  Lindsay has traveled throughout the Pacific Northwest (she loves Seattle best) and briefly lived in Nashville, TN after graduating from college.  Now she’s back home in central Illinois, married to her high school sweetheart, and raising two adorable red-headed girls.  Tricia was a horrible chaperone during Lindsay’s high school romance days (she mostly tried to negotiate situations so Lindsay and Nathan could cuddle), and she had the honor of being a bridesmaid in their wedding.  Now Tricia is everywhere else – from college in Tennessee to getting a graduate degree in Texas and soon heading to Greece to work at a safe house for women who have been sexually exploited.  Although both lead different life paths, they both have the travel & adventure chromosome in their DNA.

Because of this, their utter dislike of anything to do with exercise, and their love for Jesus, their friendship remains.  Tricia visited Lindsay when she lived in Nashville and ALWAYS sets a day aside for coffee when home visiting family; Lindsay went one step further to visit Tricia in Texas and even Senegal, West Africa.  Their friendship is strong enough to allow them to live separate lives, confident that knowing the moment they’re reunited, everything will fall back into place.

Still….why not help the friendship along a little?  Although they are currently together in Peoria, Tricia is leaving for her next adventure to Greece in January.  Since they both have blogs, they’ve decided to spend each Thursday writing to each other – Tricia on the first and third Thursdays of each month, Lindsay on the second and fourth.

You will be thoroughly entertained! No doubt about it! Join the silliness and adventure of Tricia and Lindsay’s lifelong friendship with Letters Between Friends!