It’s been raining constantly for the past two days, which is….fine. I wanted fall weather. But my rainboots are not quite waterproof, and I have to admit the cold and the wet put a damper on Elizabeth’s and my Book Day in Baltimore trip. 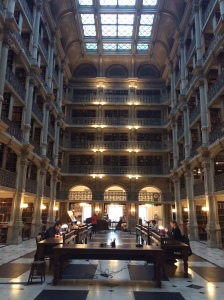 We started at the Peabody library, which was stunningly gorgeous. All the books are behind locked glass doors, which we agreed showed proper respect. You also weren’t allowed to go upstairs, which was kind of annoying. But let’s be real, if I’d been able to browse the five stories of library, we wouldn’t have done anything else. 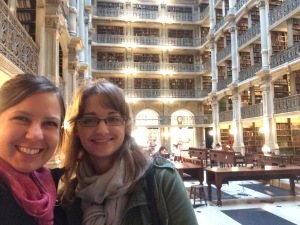 Next we ventured outside into the windy, chilly rain. We walked for a mile, umbrellas frequently turning inside out, until we reached Red Emma’s, a radical bookstore for anarchists and communists. We browsed a while, but the radical books were full price, so I got Aristotle’s Poetics for $2 and Murasaki Shikibu’s Tale of Genji. I therefore honored my love of Greece and Japan, and it was SLIGHTLY radical, since Tale of Genji is often considered the first work of prose, and by a woman! Then we devoured some Greek spanakopita before hitting the streets again. 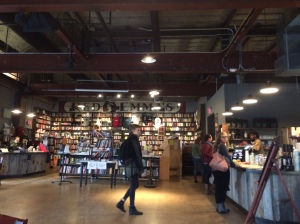 We’d seen a Nepalese/Indian restaurant on the way, so we hurried there, only to realize it had just closed. Luckily, there was ANOTHER Nepalese/Indian restaurant across the street. They were open for another thirty minutes, so we filled two plates each with what was left in their buffet. There was still tikka misala, so I was very satisfied. They also had some variation of chai available in the buffet, and it was the most delicious thing I’ve ever drunk. 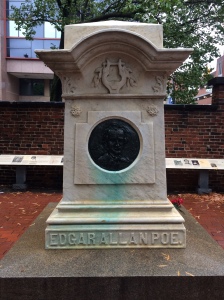 By the time we had walked the mile back to our car, my feet and lower legs were soaked (thanks a lot, rainboots). We were bedraggled and exhausted, so we drove to Edgar Allen Poe’s grave, jumped out of the car to take a picture, and then returned to the comfort of a heater. Because it was a Friday, we accidentally got caught in rush hour traffic at 4:00 p.m., so it took longer than necessary to get back to Rockville. We picked up a bottle of wine, ate popcorn, and watched To Catch a Thief. I plan to spend the rest of the night finishing And Nothing But the Truthiness, and then I’ve got to rest.

The Harry Potter Festival is tomorrow!!

2 thoughts on “Book Day in Baltimore”