I’ve been on the road for eleven days.  I’m enjoying it immensely, but I was craving a break.  Luckily, I am staying with my great-aunt Sue for two nights, and she works during the day.  I got to sleep in, lounge around lazily during the morning, then use Starbucks’ wifi in the afternoon!  I didn’t have to talk to anybody, do anything, or pay attention to traffic.

Aunt Sue is a wonderful hostess.  I woke up to notes on the counter encouraging me to eat everything she owns and also use the Steak N Shake gift card and $20 she left for me.  I LOVE BEING SPOILED.  She also bought a bunch of smoothie ingredients because Grandma told her I like them, so naturally, that’s what I ate for breakfast.

Last night, Aunt Sue introduced me to Rachel, the stray cat she feeds outside her apartment.  She warned me that the cat could be a little skittish around strangers, so:  Challenge Accepted!  This morning I stepped outside, called to Rachel, and within two minutes she was running back and forth under my hand begging to be petted.  My Animal Whisperer abilities remain intact. 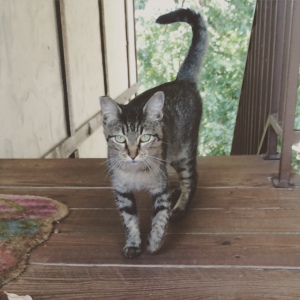 As per her notes, I ate at Steak N Shake for lunch, then went to Starbucks for their wifi.  I missed my fundraising meeting online, whoops, which is the first time I’ve let my Crazy Roadtrip Schedule mess up my organizational talents.  I tried to make up for it by contacting people at my next couple destinations and hammering out plans for the next week or so.  Before I left on this trip, I thought I’d done pretty well planning everything, but there are so many details (especially in Jackson and Dallas) to figure out!  Hopefully they’ll come together soon.  And if not…well, that’ll be an interesting blog post. 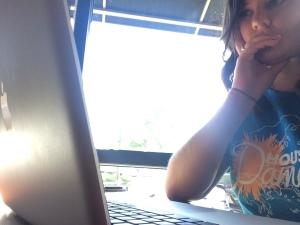 After Aunt Sue came home from work, we went out to eat salads at O’Charley’s (also because Grandma told her that I like salads).  We’re spending the rest of the evening at her apartment.  I’ve so enjoyed getting to know her better.  She has the BEST voice – all Southern Illinois sweetness and a very cute laugh.  She’s fiercely independent in her late 70s, incredibly generous, and just a little bit sassy.  I like her!

Tomorrow I’m staying in Birmingham but switching hostesses!  I’m looking forward to being reunited with Stephanie Broach and finding out how life post-DTS has treated her!

One thought on “A Slower Day in Alabama”