I loved Rutkoski’s Kronos Chronicles series, and her ability to create a believable fantasy world holds true.  Can you sense the “but” coming?  But….I thought The Winner’s Curse indulged in YA romance tropes, when I know she can do more interesting things with relationships.  Kestrel and Arin have a definite Romeo-and-Juliet vibe going on, since he is her purchased slave, but their feelings for each other felt too inevitable.  Is that a weird complaint?  Neither of them seemed to really care about the social implications of their feelings for the enemy, even if their internal dialogue begs to differ.

Along the same lines, for two characters who are supposed to be master strategists, they were both dumb so often!  Arin made almost no effort to hide in his role as a slave.  Kestrel was shocked at the scandal she caused, when….come on!  It’s obvious what everyone is thinking!  Maybe there’s a point in there somewhere, that they’re good military strategists but lousy at understanding emotions.

I think I’m just disappointed.  There is so much that could be interesting about a warrior nation taking over an artistic and peaceful country, but instead of politics and culture, we got romance.  Which I KNOW is the point of the book.  I wanted something else, and I guess that’s my fault for holding a story to standards its not trying to meet.

Before this ends, I’ll say that I really liked that Kestrel is always portrayed as strong and capable, but her strength is never physical.  I like that the Strong Female Character is broadening to something more than “woman with the skills of a man.” 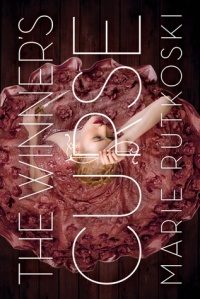 As a general’s daughter in a vast empire that revels in war and enslaves those it conquers, seventeen-year-old Kestrel has two choices: she can join the military or get married.  But Kestrel has other intentions.

One day, she is startled to find a kindred spirit in a young slave up for auction.  Arin’s eyes seem to defy everything and everyone.  It’s not long before she has to hide her growing love for Arin.  But he, too, has a secret, and Kestrel quickly learns that the price she paid for a fellow human is much higher than she ever could have imagined.

Set in a richly imagined new world, The Winner’s Curse is a story of deadly games where everything is at stake, and the gamble is whether you will keep your head or lose your heart.