Seriously, will I ever tire of reading his modern-age mythologies?  I honestly don’t think so, especially when he can get me interested in Norse mythology (of which I know very little other than that I am attracted to Tom Hiddleston’s Loki).  Speaking of which, it was fun to see Loki on the page, as well as Thor, and to see how they compare to their Marvel counterparts.

But Riordan’s talent proves that he didn’t need to lean on the popularity of Marvel’s Norse gods to make a really fun book. I’m still getting the hang of Norse mythology, but I like Freya and her cats, and the Nine Worlds provided a lot of really fun settings for our characters to explore.

And those characters!  Riordan continues to amaze me with his ability to create a diverse cast of characters that honors their diversity without feeling like that is the focus of the story.  This time we get deaf characters, Muslim characters, and homeless characters – men and women and elves and dwarves!  The sheer number of books Riordan writes would make sense if he was constantly remaking the same character, but he takes the time to develop really thoughtfully unique people.  I especially loved his attention to detail with Hearthstone’s deafness, including little touches like how with the elf puts his hands in his pockets, it’s basically him saying he doesn’t want to talk.

And while Magnus is the white male protagonist, he’s far from typical.  It is so refreshing to read about a main character whose power is in healing and peace, not war.  There’s still plenty of action, but I’m glad we’re getting someone outside the Percy and Jason mold.

It took me a few chapters to really get into the story, simply because it’s a new world with new characters (with one notable exception!).  But by the end, I was totally hooked!  I can’t wait to see what Magnus and his friends get up to next time. 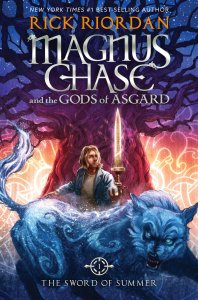 Magnus Chase has seen his share of trouble.  Ever since that terrible night two years ago when his mother told him to run, he has lived alone on the streets of Boston, surviving by his wits, staying one step ahead of the police and truant officers.

One day, Magnus learns that someone else is trying to track him down – his Uncle Randolph, a man his mother had always warned him about.  When Magnus tries to outmaneuver his uncle, he falls right into his clutches.  Randolph starts rambling about Norse history and Magnus’s birthright: a weapon that has been lost for thousands of years.

The more Randolph talks, the more puzzle pieces fall into place.  Stories about the gods of Asgard, wolves, and Doomsday bubble up from Magnus’s memory.  But he doesn’t have time to consider it all before a fire giant attacks the city, forcing him to choose between his own safety and the lives of hundreds of innocents…

Sometimes, the only way to start a new life is to die.

4 thoughts on “Magnus Chase and the Gods of Asgard: The Sword of Summer by Rick Riordan”