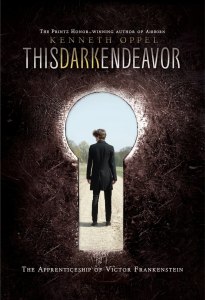 I’ve never been hugely drawn to stories about Frankenstein or his monster, but my librarian friend Kelly suggested I read This Dark Endeavor after I admitted liking Oppel’s book The Nest.  Although I may never get into horror movies, I really enjoyed the book!

Oppel gives us Frankenstein’s origin story, and man, is it a good one.  It might have been a ridiculous task, creating a believable history for a character who will grow up to be obsessed with immortality to the extent of creating a literal monster.  But Oppel does a phenomenal job:  teenaged Victor is the twin of his two-minutes older, stronger, faster, wiser brother who also gets the girl.  Clearly we have a case of sibling rivalry, although Victor and Konrad also have a lot of affection for each other.  The more you love someone, the more you hate them!

When Konrad falls ill soon after they discover a hidden room in their mansion – a room filled with illegal alchemical formulas – Victor becomes obsessed with finding a cure for his twin’s disease…and maybe a cure for death itself.  While he’s at it, if cousin Elizabeth decides she’s in love with him instead of Konrad, well, all the better.  So many twisted motivations and emotions!

The three-part adventure retrieving alchemical ingredients is really exciting, but I loved the book most for its complex family dynamics and questions of science/faith/magic.

This Dark Endeavor stands alone, but apparently there’s a second book, so I will have to give that one a try too!

In this prequel to Mary Shelley’s gothic classic, Frankenstein, sixteen-year-old Victor Frankenstein begins a dark journey that will change his life forever.  Victor’s twin, Konrad, has fallen ill, and no doctor can cure him.  Unwilling to give up on his brother, Victor enlists his beautiful cousin Elizabeth and his best friend, Henry, on a treacherous search for the ingredients to create the forbidden Elixir of Life.  Impossible odds, dangerous alchemy, and a bitter love triangle threaten their quest at every turn.