I returned from Berlin (read about my hilariously mediocre weekend here) on Monday evening.  Dina and Argyris took me to the Greek Evangelical Church to give a laidback presentation to a group of 20+ college students here to work with refugees on their spring break.  College kids are great because they still have that amazingly naive and powerful belief that they can change the world.  I loved seeing them learn about sex trafficking and HD and wanting to get involved.  And while I still very much hate public speaking, I really enjoyed talking to individuals and small groups about my involvement and story.  I’m looking forward to more of this in the future!

But the real story of this week was:  the Pamurthys came to Athens!  I worked for them for three years when I lived in Dallas.  As Anju and Ketan’s nanny (read about some of my favorite memories here), I was at their house every weekday evening, so they quickly became my Dallas family.  When they told me they’d decided to make their 2016 vacation to Athens while I’m here, I was thrilled to get to hang out with them again.

Unfortunately, Ketan came down with a fever during the flight from Istanbul to Athens, so he and Chrisette stayed at the hotel.  I met up with Anju and Sanjay, though, and we did a bit of tourist-ing to Hadrian’s Arch, the Temple of Zeus, and the Olympic Stadium.  Sanjay kept saying, “This is so COOL,” which was all the encouragement I needed to unload two months of Greek language, culture, history, and mythology facts. 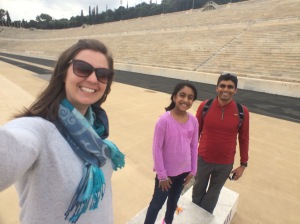 It was also great to see how quickly everything felt normal. It’s been nine months since I moved away from Dallas, and five months since I saw them on my road trip. But they’re so easy to be around! Like….people who I saw every weekday night for three years and practically lived in their house, so I guess it shouldn’t really be all that surprising.

On our way back to the hotel, I noticed that we were passing Little Kook.  Sanjay gave us some money to spend (he and Chrisette are my parents as much as my employers) and let us spend some time at the super cute fairy tale cafe.  Anju and I talked about the Hunger Game and Star Wars, both nerdily and thoughtfully.  At one point, Anju said, “The Hunger Games doesn’t have a happy ending.  So much has changed for Katniss – it’s not always good or bad, but it’s change, and she has to deal with that.”  By the way, she’s NINE. 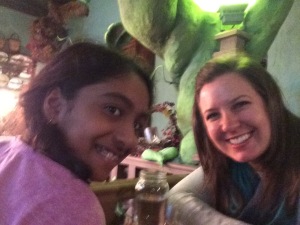 We headed to the hotel, where I got to see Chrisette and Ketan.  They brought me some presents – makeup that I had requested, some really beautiful earrings, and GIRL SCOUT COOKIES.  They know me so well.  We laid around and watched The Matrix before heading out for dinner (everyone but Ketan, who rested).

The next day, we were supposed to take a road trip to Delphi.  Ketan was still under the weather, so he and Chrisette were out, and when Sanjay went to the car rental place, they said he needed to have an international driver’s license.  On to Plan B!  Anju, Sanjay, and I did some more tourist-ing.  I was worried, because we’d done most of what I knew the day before, but it turns out we had plenty to do here in Athens.

I met Sanjay and Anju at the fairy tale cafe. We grabbed souvlaki at a little restaurant and stumbled upon Hadrian’s library, where we befriended a dog and had a nice look around.  The highlight of the day was definitely the Ancient Agora. I was there 12 years ago, but I did not appreciate it in the slightest. This time Sanjay walked us through the place with the guidebook suggestions, and it was so cool! It really gave a sense of what the place would have been in ancient times, including imagining Socrates annoying pedestrians with philosophical questions and people loading up their arms with bread and fruits and fabrics. It was the most transported I’ve been so far while in Athens. 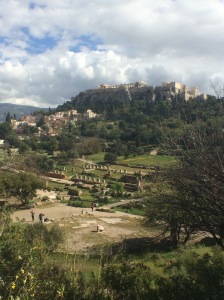 We grabbed gelato to perk up Anju’s flagging spirits and headed to the Acropolis Museum. Ketan was feeling better, so he and Chrisette met us there, but as we left, Anju was seriously dragging.  Guess who had a fever now!

Since Chrisette had been cooped up in the hotel room for two days, Sanjay took over kid-duty and she and I went out for an unexpected three-hour long dinner.  I had forgotten how nice it is to have a conversation that doesn’t start from ground zero.  We already knew a lot about each other, so after a bit of catch up we could go deep!  And even though we have very different orientations to life (her: why not?  me:  here are 50 itemized reasons why not!), I really appreciated hearing her thoughts about life and dating.  “You have to be willing to fail,” she said, and she wasn’t wrong.

On Friday, we were meant to go to the Petrou’s for lunch, and while I would have loved to introduce my Dallas and Athens families to each other, I had such a fun day lazing around with them at their hotel!  Anju and Ketan were both varying levels of sick, so we watched movies and the Disney channel, and I felt transported back to their living room, playing Candy Crush on my phone while Ketan shows me a basketball video on YouTube and Anju tells me about the newest Disney starling.  And again, I can’t stress how nice it is to be with people I know well and am comfortable with (because those things are intrinsically bound together in my mind).  We all took naps on the various pieces of furniture, we played Dixit (a beautiful and creative card game), and we psychoanalyzed each other.

Chrisette and I went out to go shopping for DVDs that would work in a Greek DVD player, and as we wandered the Plaka, she said, “What will it take for you to start asking out guys? Should we practice now?” to which I responded, “NO, that’s embarrassing!” like a twelve-year-old.  But when we found a book shop, she told me to ask for children’s Greek mythology books in Greek, which was just the push I needed to engage in a long and winding conversation with a sweet older Greek gentleman who, when I tried to switch to English in frustration, said, “Οχι.  Ξἐρεις ελληνικἀ.”

After finding Troy at a shop (I was determined that they watch it since they’d been in both Turkey and Greece), we went back to the hotel.  I switched parents, and Sanjay and I went out to find food for everyone.  Since it took a while for the food to be prepared, we split feta cheese and a bottle of ouzo and discussed international politics.  It was seriously so helpful, since I’ve been hearing a lot of opinions about Greece and the Eurozone, but I didn’t have the context necessary to really engage in the conversation.

Back at the hotel, we ate and watched Troy.   They sent me home with even more Girl Scout cookies and their guidebook to Greece, and now….now I miss them!  It was just a lovely relaxing time with people who are comfortable and easy and fun.  I miss living in Dallas.  I miss spending evenings with Anju and Ketan – cutting up mangoes and playing “which superhero would you be.”  I miss driving them home and to extracurriculars while blasting pop music and singing along.

The Pamurthys are a fantastic family.  I’m lucky to know them, and I’m even luckier to be able to keep them in my life.  I can’t wait until I make my way back to Dallas and see them again! 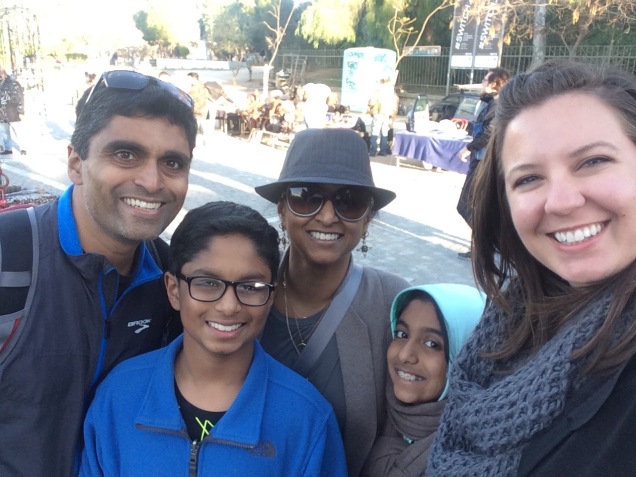 One thought on “A Week in Greece #9: The Pamurthys Visit!”