One of my goals for living in Greece for a year was to visit five other countries.  I don’t want to waste these cheap European flights!  So when Kaitlyn, one of my friends from Dallas, said she was going to Europe, and could we find a city that was cheap for both of us to get to, I said YES.  We wound up going to Berlin for two days, and I have…mixed feelings about the trip.

Kaitlyn arrived at the airport a couple hours before me and kindly waited for me to arrive so we could make our way to the hostel together.  We immediately hit a snag when we were directed to the most unhelpful help desk in the airport.

Those same hostel directions were unfortunately incomplete.  We screenshotted 98% of the website’s directions without realizing that last 2% was pretty important.  We spent an HOUR AND A HALF wandered to the right and left, asking random people where Plus Berlin Hostel was and being directed to hostels that were NOT Plus Berlin before asking someone else. It turns out our actual destination was a five minute walk from the starting point.

To exacerbate our already flagging spirits, the guy who checked us into the (admittedly large, clean, and lovely) hostel felt compelled to tell us, “Berlin isn’t what it used to be.  Sixteen years ago it was definitely cool.  Eight years ago, even, it was pretty cool.  But now it’s not worth anything.  We get too many tourists.”  We pushed our backpacks behind our legs and accepted our room key shamefully.

Luckily, things started looking up when we ate fancy burgers at White Trash (after getting lost twice, because obviously nothing about this weekend was going to be easy).  I’ve never really enjoyed beer, but the good stuff in Germany is pretty good (and cheap), and the conversation about counseling and theology was enough to reinvigorate me.

We walked the length of the Berlin Wall’s East Side Gallery, admiring the artwork and saying, “So….do you remember anything from history class about the Cold War?”  “….I really should have Wikipedia’d Berlin before we came here.”  We stumbled upon a walking tour of abandoned buildings and graffiti artists, which was only interesting for six minutes.  Both Kaitlyn and I agreed that Berlin felt dark.  She thought maybe because of Nazis; I thought it was because of change and anger and anarchy.  Either way, she was 100% correct when she said, “This is not a place I’d go on my honeymoon.”

We grabbed coffee, went back to our hostel, and fell asleep.  At 9:00 p.m.  Of course, part of this atrocity is that we’re becoming old ladies who can’t handle an early morning (me) and a long flight (her).  But I think it was also that our stumblings through Berlin had sucked the will to live from us.

But after twelve hours of sleep, things start looking a little better.  A different guy at the desk was super helpful and directed us to the hostel’s German breakfast buffet of meats and eggs and breads, which did wonders for restoring my spirits.  Then we caught the S-Bahn and headed downtown.  Despite the overcast skies and consistent light rain and my poor choice of footwear (TOMs), we had a pretty great day!

After walking past the Brandenburg Gate and the Reichstag to take pictures, we found the Memorial for the Murdered Jews in Europe.  It felt very bleak at first, since the pillars begin low to the ground and look like gravestones.  But as you wander further in, the pillars get high and you get smaller, and in a weird sort of way it starts feeling fun.  It’s a maze, or a hiding spot, or a mountain pass.  We started taking silly pictures and it didn’t feel wrong (although I drew an arbitrary line at standing on one).  As we walked between 8-feet tall columns, Kaitlyn said it felt hopeful, because it feels like you’re walking alone until you glance to the side and see the flash of someone else’s coat walking beside you, mostly unseen but always present.

The day just kept getting better as we toured the Ottobock Museum, an interactive museum of prosthetics that my friend Emi recommended we visit.  The displays were cool, fun, and informative.  The design of the place was sleek and aesthetically pleasing.  It was also free, so there is no reason it shouldn’t be on everyone’s Must List for Berlin.

For our late lunch I had currywurst, a weirdly delicious culinary combination that perfectly captures Berlin’s twist of history and outside influences.  And then we went to the one place I was most excited to visit:  The Ritter Sport chocolate shop/museum!  A chocolate shop/museum!!  That sells chocolate and also tells you how chocolate is made!  Delightful.

Unfortunately, although I was able to buy the only perfect souvenir (sweets), our day plummeted a little.  The cashier told us the chocolate creation section had just closed, but Kaitlyn and I agreed to double-check.

Kaitlyn:  Is this where we make our own chocolate?
Chocolatier:  Yes!  You can choose white, milk, or dark chocolate.  Then you can choose up to three of our twenty ingredients to add, and it will take only thirty minutes for us to make it for you!
Me:  Awesome!  So how do we start?
Chocolatier:  You can’t.  We just closed.

To soothe our chocolate-less hearts, we went to the third floor cafe.  The woman at the entrance warned us that they were only opened for another twenty minutes.  “That’s fine,” we said.  “We’ll have an espresso and a hot chocolate.  And could we maybe get to-go cups?”  The waiter looked confused.  “Oh, well, they have to-go cups downstairs, but I’d have to like, call people…”  “Nevermind, just the drinks please!”

Seventeen minutes later, our hot beverages arrived, and the waiter said shyly, “We’re closing.  Do you want me to get you a to-go cup?”  I smiled my fake smile and said, “Yes, that would be great.”

We left the chocolate shop/museum (!!) and walked to Museum Island, where there were a lot of beautiful off-limit buildings to us, because it was 6:00 on a Sunday and we forgot to take that into consideration when planning our two-day trip.  Instead, we arrived early to the restaurant where we were meeting one of Kaitlyn’s friends as well as her friend, and we had dessert for dinner so everything felt better.  After a lot of nice conversation, we returned to our hostel and managed to stay awake until 11:00 p.m.

As we rode the S-Bahn to the bus station the next morning (because, you know, it doesn’t go to the airport), Kaitlyn asked what I thought of Berlin.  “Hmm.  Well, I like wine more than beer, and I am apparently way more a fan of the sun than of rain, and I’ve met more rude people here in two days than I have in the two months I’ve lived in Athens.  I’m ready to go home.  But it was so great to hang out with you!”

And it was.  Because even if a city disappoints, weird weekends can be redeemed by good company.  I’m so glad Kaitlyn and I met up in Berlin, and although I don’t feel compelled to return anytime soon, I’m glad I got to brush up on my Cold War history and hang out with a friend. 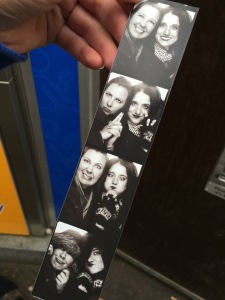 4 thoughts on “A Weekend in Berlin”