A few weeks ago, Anthi invited me to join her and some friends in going to Leutraki (near Corinth) for a weekend conference with the Free Evangelicals of Athens.  Apparently I have not been attending a Free Evangelical church, but when asked my opinion on free will vs. predestination (“I think they’re both right, but we don’t know how”) I was given clearance to come.

I didn’t expect to learn anything, since the whole conference would be in Greek, but I was super into the location.  We stayed at a resort by the sea and paid only €105 for two nights and six buffet meals.  That would have been enough to satisfy me, but Anthi made sure to find translators for me during each presentation.

Can we pause a second and talk about how humbling it is to not know a language?  There’s the everyday “everyone is talking about something, and I have no idea what it is!” and the similar “oh no, they are asking me to perform and all I can think of is ‘Μιλἀω ελληνικἀ λἰγα αλλἀ νομἰζω οτἰ ξεχνἀω πολὐ’ and I said that last time.”  But there’s also the next level up: being translated to while 130 people sit around you.  This is maybe an introvert-specific humiliation, since my highest aim in life is to blend in.  There’s something so humbling about letting everyone know that you’re alone in your confusion and that you need help.  This is a good thing, I think, learning to accept help….I just don’t like the process of learning it.

The theme of the weekend was “Satisfied Christians” and our three meetings revolved around being satisfied in work, in family, and in church.  We had three different speakers and I had two different translators, but each lesson (well, maybe not the job one) was really powerful.  Whether we were learning from Joseph that you don’t have to like or even value your family, but you do have to learn to forgive them, or whether we were thinking about why in the world Jesus decided to let people see him via the Church, aka a Hot Mess, it was all really insightful and grace-filled and encouraging.

PLUS, there was singing!  With the words on the screen, I could sing along in Greek pretty well, and I had such a blast almost-understanding what I was saying.  Songs are repetitive, and Christian songs in particular tend to say “heart” and “life” a lot, so I could do Greek lessons while worshipping.

This being Greece, we only had one meeting per day.  The rest of the time, people were hanging out, eating, traveling around, or lounging by the sea.  When we first arrived, I was surprised to be sledgehammered with homesickness.  We kept running into people in the parking lot, and Anthi would hug them and everyone would shout at each other and invite each other to hang out….and I missed MY people.  It reminded me of the mission trips Woodland goes on every summer, how we pull into a motel parking lot and exclaim over each other as though we hadn’t just seen everyone the week before. 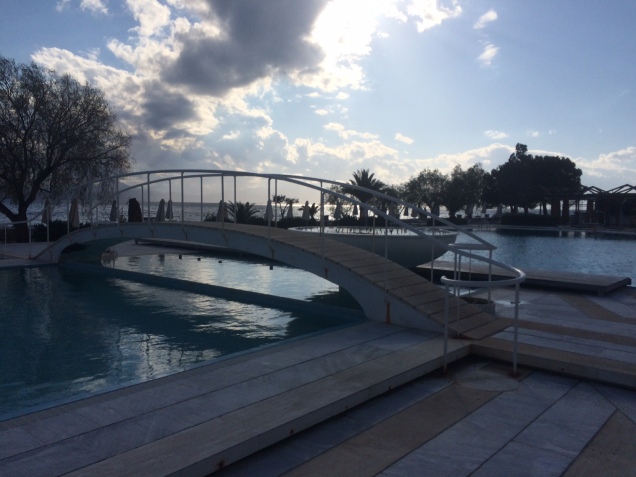 So even though everyone was incredibly nice, I spent an increasing amount of time alone.  In between meals, I would walk by the sea, or fall asleep by the sea, or read The Making of an Ordinary Saint by Nathan Foster (which is SO GOOD and will be discussed further in another post).  I was just really sad, and I was tired of making people speak in English, and I was tired of feeling excluded when they didn’t speak English, and I really craved feeling comfortable.

On Saturday, after our morning meeting and 2:00 lunch, Ioanna showed up for the day.  She told me some people were going to Trikala, which was supposed to be “the Alps of Greece,” so of course I wanted to go.  It took over an hour to decide who was going, but eventually we set off!  And got lost.  One car turned back, but two of us kept on.  I fell asleep, but Irini (Anthi’s sister) woke me up as we started driving up the winding mountain roads.  It was STUNNING, but I didn’t take any pictures.  This was super dumb, because by the time we reached the holiday hotels and tavernas, it was almost dark.  Everyone else immediately went inside to drink coffee and talk, but luckily, Ioanna wanted to go outside and actually see the incredible views we’d driven so far to see. 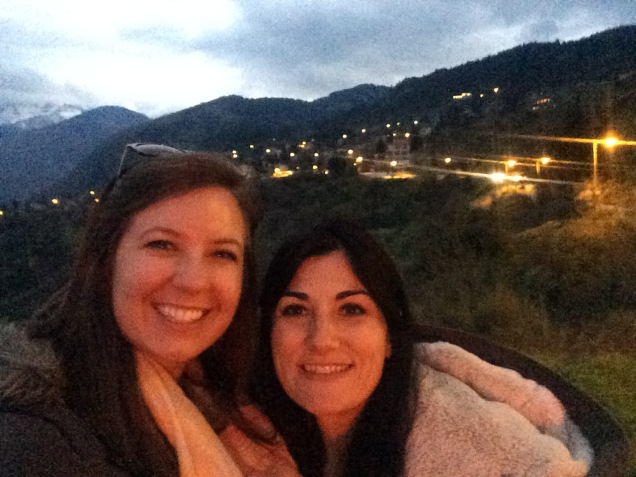 During our walk back down the road (so that the rest of our group could just pick us up on their way down the mountain), I told Ioanna about being homesick.  I told her that being outside and being somewhere beautiful went a long way toward making me feel better.  When I asked what she did when sad, she said, “I let the sadness live.”

I liked this answer SO MUCH, and it gave me the courage to tell Anthi that I wasn’t going to the 10:30 missionary meeting that night when we returned, nor was I going to her friend’s surprise birthday party.  I wanted to be alone and sad, and I gave myself that space.  It helped so much just talking to people and admitting my feelings.  Funny that, as a counselor, I’m still so amazed how helpful it is to be open and honest.

It also helps that Anthi is a wonderful friend.  She never pushes me to do something I don’t want to do, but she’ll tease me about it and continue to offer me more opportunities.  And then she’ll fall on her bed and admit that she is also tired of talking to people, so we can have a deep conversation about self-hatred and spiritual disciplines, which is EXACTLY my kind of late-night girl talk. 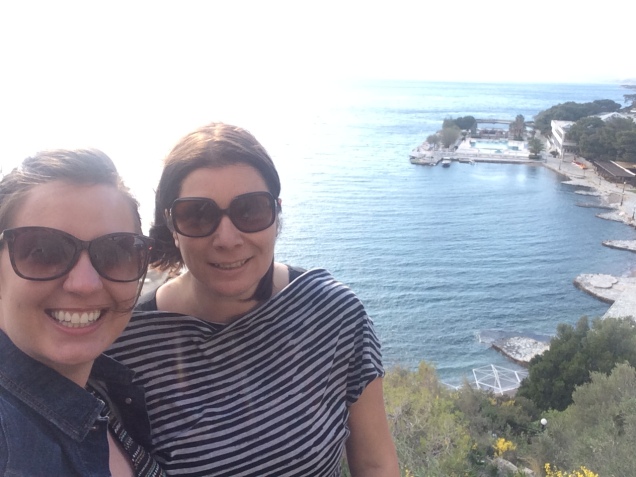 It’s been a while since I’ve been so comfortable with “Christian-y” things.  A lot of it has felt like play-acting, to be honest.  And there’s another blog post coming about my relationship with God and how scared I am to discover his grace is actually conditional.  But this weekend, spent with established friends and new friends (“Tricia, would you like to meet another American?”  “Um, sure…”), listening to sermons based on healthy relationships and grace, surrounding myself with peacefully beautiful nature….I feel really satisfied.  In the midst of sadness and confusion and growing pains, I’m satisfied that God is good, and that he wants good things for me.  Which is what this weekend was all about, so….mission accomplished, though not in the way I expected!

One thought on “Friends, Food, and Spiritual Insight: A Christian Conference in Greece”