So much happened this week but in exactly three categories:  house hunting (!), class planning, and Nafplio.

I’ve been thinking about moving into my own apartment for about a month now.  It would save me money, put me closer to HD, and give me some much-needed introvert time.  I thought that when I brought the subject up, everyone would talk about and think about it and a few months from now, something would happen.  NOPE.

I told Anthi about it last week, and the next day she called to say, “I found a 2-bedroom apartment for only €300!”  I freaked out, because I was not ready to make this thought a reality, but I broached the subject with Dina and Argyris last Sunday.  “This is a wonderful idea!” Dina said.  “We knew you would spread your wings and fly,” Argyris said, “But we did not expect you to want to fly this soon.”

Long story (aka I whined and stressed for several days) short, on Friday Anthi and I visited the apartment she saw and it is AMAZING.  Beautiful, newly renovated, private, so much amazing.  There is a random tiny room that is kind of like a walk-in closet without shelves, and I immediately pictured it covered in pillows and converted into a comfortingly claustrophobic Reading Room.

There are side things that point toward this being a good decision (a friend needing a place to store all of her furniture at, say, my apartment? and the apartment’s renovations being finished exactly when I wanted to move in), so…. I don’t know!  It still seems crazy to have gone from “Hey, so, uh, I’m thinking about this” on Sunday to “This is an extremely real opportunity” today.  I don’t like making big decisions quickly, so this is both exciting and stressful.  We’ll see what happens! 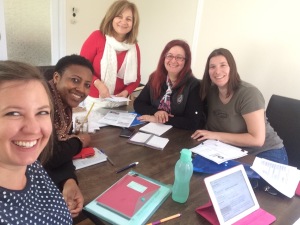 Once again I had a lot of HD in my week.  On Tuesday we had a staff meeting, and then I went with Dina and her son to run some errands.  We had a lovely little moment when Dina apologized for bringing me along to wait in a doctor’s office, and I assured her I did not mind waiting at all because I had a book.  “I am the same!” she said, so we went down to her car, rolled down the windows, and read together in silence.

On Wednesday, Francisca and Anthi and I met to sort through the printed curriculum and put it in official-seeming binders.  We met again on Thursday to continue, and Francisca and I also created special Day Program schedules for the first two weeks (which begins April 15th, yay yay yay!).  After that meeting, I had coffee with a friend, then took the wrong bus to Dina’s house.  She had to come pick me up from the side of the road, and then we had an amazing two hours of email writing wherein she and Argyris said, “Pssss!” (which is the Greek way of expressing approval) as I read aloud my Americanized versions of their sentiments.

On Friday, I had a meeting with my GEM supervisor to discuss the future (more on that another time, I’m sure).  When Anthi finished her class, we ran some errands and then went back to her house to eat, rest, run more errands, eat more, and watch The Whole Nine Yards.  I spent the night, and this morning we took a road trip to Nafplio!

On the way we passed signs for Nemea…

Me:  Like the Nemean lion that Hercules killed??
Anthi:  Yes!

Me:  Like the guy with thousands of eyes all over his body??
Anthi:  Yes!  Ooo, I like you!
Me:  I love Greek mythology.
Anthi:  You have noticed by now that Greeks are proud people.  Everyone will love you because you love us.

Nafplio was once the capital of Greece, and it’s this really beautiful little peninsula jutting into the Aegean Sea.  We drove first up the mountain to walk through the massive Palamidi fortress.  Like the Acropolis in Athens, this is where ancient Greeks would retreat to in times of war.  Unlike the Acropolis, this place goes on and on and on.  It was really fun to explore and wander, and there’s even a creepy little doorway leading into a tiny room leading through a creepier doorway into a tinier room that was once their prison. 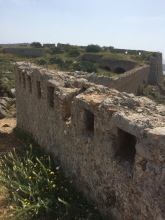 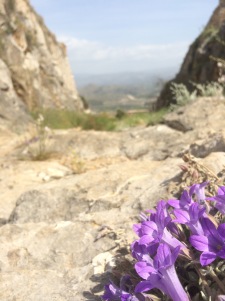 After finishing on the mountain, we drove down to the Old Town, wandered through expensive tourist shops, ate gelato in the morning, took a stroll around the outside of the peninsula next to the sea, and ate lunch.  We talked about personality tests and female sexuality (normal topics for me) as well as European politics and American culture (not so common, but cultivated because I am becoming a more cultured person!).  It was really fun to discuss the strengths and weaknesses of our countries, and it was sad to hear about how other countries view America (“We are all scared of what America will do next, and we wish you would not get involved in so many other country’s problems.  Also, why do you like guns so much?  I’ve never seen a gun in my life other than in movies!”  “Wut.”) 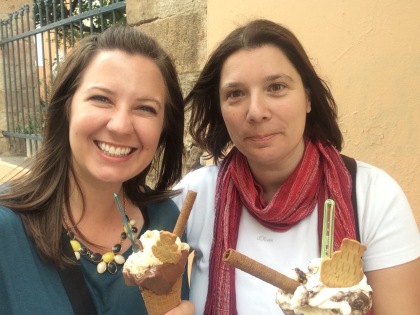 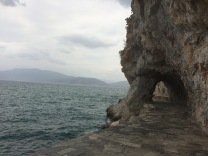 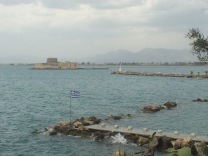 Eventually we had wandered in circles enough times that I suggested we find another city to drink coffee before heading home, so we drove down the coast a bit to Tolo.  We walked along the beach there before finding a place to order coffee.  During our discussion of America, I mentioned that although I mostly roll my eyes at American history, I was COMPLETELY OBSESSED with this musical called Hamilton.  When we got in the car to start the two-hour drive back to Athens, I said pseudo-calmly, “Can I play you the first song?”  Four minutes later, Anthi wanted to hear it again so that she could catch everything.  “So, uh,” I stammered, “do you want to hear another, or should I switch to a different kind of music?”

She wanted to hear more, and I quickly took advantage of the situation to walk her through the entire musical, filling in gaps as I played important songs, gushing about my feelings toward certain characters, and delighting in her responses of, “Wow!  I like this!  What are duels?  You Americans and guns, I see.  I like Angelica!  Why won’t Burr be a man and not a baby?  Is Hamilton’s death a tragedy for America or a personal tragedy?  Ooo, I am going to go home and immediately look up everything about this musical!”

I DID IT!  I thought my days of converting people to Hamilton were over when I moved to Greece, but no!  It was honestly my favorite part of the whole trip.  There’s nothing I love more than watching someone fall in love with a thing that I love.