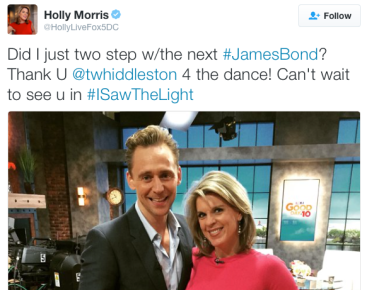 Elizabeth:  Remember all the furor over “blond Bond” Daniel Craig?
I’m so glad we’ve moved into an era of acceptance where Bond can be a blond chiseled and sexy white guy instead of a brunette chiseled and sexy white guy.
Tricia:  I see your sarcasm, but I really liked Daniel Craig’s Bond.  HOWEVER, I feel it is important to say that although I want Tom Hiddleston to be in everything, I actually think Idris Elba is the best Bond choice.  We need some racial diversity while maintaining the Bulky Man Box aesthetic.
Elizabeth:  Idris Elba!

Elizabeth:  I very much want Tom Hiddleston to play Lord Peter Wimsey, though, and I think that will take up a lot of his time.  I’m not sure how many franchises he can fit into his schedule.
Tricia:  You are already worried about his schedule re: the fake dream job you’ve assigned him?
Elizabeth:  Just imagine him quoting early modern poetry in a boat at Oxford!
Tricia:  I assume that is something Lord Peter Wimsey does, which makes me very interested in Lord Peter Wimsey.
Elizabeth:  Do you need me to mail you some books?
Tricia:  YES, obviously, mail me books!

Elizabeth:  He writes his own poetry too.  Which I never thought I would find attractive until I thoroughly over-identified with his love interest, Harriet Vane.
Tricia:  I bet Tom Hiddleston has a secret journal on his bedside table full of poetry he writes when he cannot sleep!
Elizabeth:  It’s probably absolute crap.
Tricia:  It is, but so earnest.  With awkwardly forced rhymes.
Elizabeth:  Bless his heart.

Tricia:  Oh my gosh, wait, let me find something for you.
Elizabeth:  Is it that thing where he reads e.e. cummings?  Because that is definitely nsfw.
Tricia:  I know exactly what you’re talking about, but no, that’s not this.  Is this not the most accurate thing in the world? 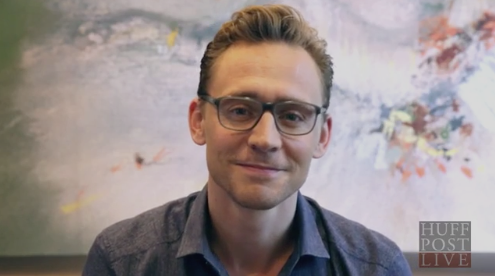 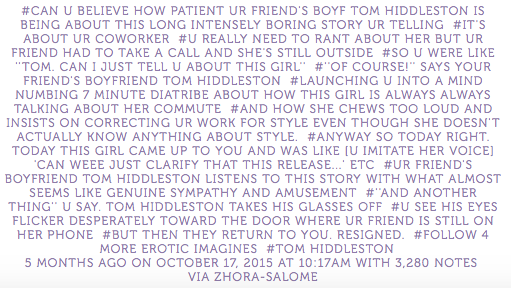 Elizabeth:  It’s 100% accurate.  Wait.  In this fantasy, he’s not even *my* boyfriend?  He’s *your* boyfriend??
Tricia:  Hahahaha YES.
Elizabeth:  Tricia.  We need to discuss this.
Tricia:  I can’t change the internet.  That’s what it says.

Elizabeth:  Sidebar:  Something I’m realizing is that all our conversations for this co-blog feature will inevitably devolve into fangirling over Tom Hiddleston or Justin Trudeau.
Tricia:  I think that is a worthy goal, and not something to ashamed of at all.