Having grown up in rural Illinois where individualism is king and Easter mostly meant chocolate bunnies, I was thrilled to participate in ο Επιτἀφιος (Good Friday) and η Ανἀσταση (Resurrection) Orthodox services while living in Greece.  Although I was an outsider, it was a very cool experience to participate in the traditions that Greek Christians have observed for thousands of years.  Before I get into the details of how I celebrated Good Friday and the Resurrection, a brief overview of the Orthodox Easter, because it is so much more than these two services.

The Easter season begins with Καθαρἠ Δευτἐρα (Clean Monday), forty days before Easter.  On this day, fasting from meat and other animal products begins.  Or it would, if you were a strict observer of Orthodox practices, and most Greeks today are not.  Still, it’s a kick-off of the Easter season wherein you eat with friends and family before flying kites.  For real, kite flying is an Easter season tradition, which I find so enchanting.

Holy Week is celebrated in full.  Beginning on Κυριακἠ των Βαιων (Palm Sunday), there are church services every day of the week.  Each day is called Μεγἀλη Δευτἐρα, Μεγἀλη Τρἰτη, etc (Big/Great Monday, Big/Great Tuesday, etc). During this week in particular, people fast from animal products.  They will often buy Easter foods (made with eggs, cream, or meat) before Sunday, partly because the shops will all be closed on Easter, and partly as a test of faith.

They dye Easter eggs on Thursday – today there are a variety of colors, but traditionally all the eggs were red to symbolize Jesus’s blood on the cross.  Candles are also a big deal, since many of the Easter services involve lighting them.  During this season, Barbie dolls and Star Wars figurines are sold with matching candles.  Other people decorate their own.  And of course, like all good commercialized nations, there are chocolate eggs!  But Greece shows up even the United States by throwing a toy inside the egg. 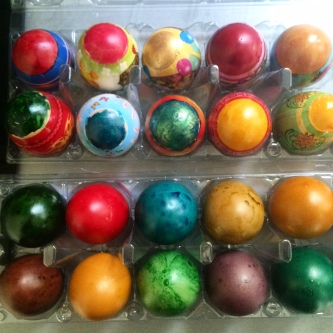 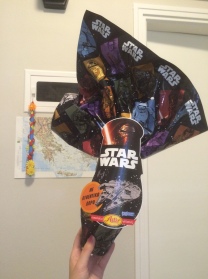 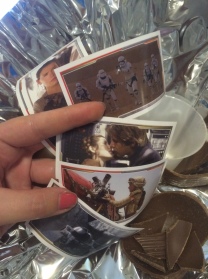 This word, from which we get the English “epitaph,” describes the resting place of Jesus’s body, be it casket or tomb.  On Friday night, people gather at church at 8:00 p.m. to hear the three traditional songs of the evening.

A Greek friend of mine, Maria, kindly planned to take five non-Greeks to Orthodox services.  We met at the Thissio metro station in the city center, then walked to a church that is more than 1,000 years old.  It was closed.  Undeterred by this weird occurrence, we followed the sounds of chanting to a nearby church.  We squeezed our way into the courtyard and got as close to the church doors as we could.  There were hundreds of people with us, some devout, most tourists.  I wondered where I fit on the continuum.

Maria was unhappy by the poor singing quality of the men (only men sang the songs), but I enjoyed reading the English translations she provided.  “The Life, how can you die?  How can You reside in a grave?  You abolish the realm of death and resurrect Hades’ dead.  We exalt You, Jesus King, and honor Your burial and Your woes, which saved us from dissolution.”

We stood in the crowd from 8:00 until 9:30.  This is a long time to not understand what’s going on.  My mind wandered, thinking, “My back hurts.  How much longer will this go on?  Is that guy looking at me?”  It struck me that this is a uniquely not-American experience.  There are few times in my life when I am that uncomfortable or pressed by people.  It made me think of the people gathered at Pilate’s palace as they awaited Jesus’s verdict.  It made me think kindly of them standing in confusion, grumbling about bodily aches, and eyeing up the hottie across the courtyard.  The more people change, the more we stay the same.

At 9:30 the men came out (again, only men were in religious positions of power), several holding gold icons (“It’s not real gold,” Maria told us), one swinging incense, followed by a crowd of men in black singing from papers illuminated by cell phones.  Then came the Επιτἀφιος, a flowered casket-type object borne on the shoulders of four men.  They began the long procession around the church, and the crowd pushed after them with lit candles.  In the city center, this is a slowly moving process far removed from my visions of beautiful candle-lit crowds making their way down an empty street.

We tried to beat the system by going into the church once everyone had left, anticipating when the επιτἀφιος would return.  But half an hour later, I was eyeing the time, worried about making the last bus back to my home.  We started to leave but got caught in the church courtyard entrance as the επιτἀφιος re-entered and stopped right in front of us!  A crowd formed, people ducking underneath it, some kissing it, and then emerging on the other side to receive a flower from the priest.  It sounds sweet, and I think it is, but the reality was a lot of pushing and people telling the crowd to only enter from one way and the priest running out of flowers.

Most of the time I want things to run smoothly and look as beautiful in reality as it seems in my head.  But the chaos of this event felt better to me for the chaos.  That’s humanity – unruly and desperate – and I like when church reflects this.  I like this all the time, but especially on Good Friday.  After all, there is no other holiday meant to capture the loneliness and fear bound up in the human condition when we are without the unconditional love of Jesus.  This is why, as an adult, I crave the Good Friday services I went without as a child.  There is something so special about the church carving out time to indulge in our weakest moments, to assure us that we are not the first to fear, to give us space to be at our lowest before Sunday arrives.

…Or in this case, Saturday.  The Easter service actually begins at 11:00 on Saturday evening in Greece!  My new friends and I (which, let me interject, included two Greeks, two USians, one Tanzanian, one South African, and one Brit – I LOVE hanging out with ex-pats) gathered at Kendra’s apartment at 8:00 for dinner.  Maria, our Greek guide, made almost traditional soups for us.  I say almost traditional because she only included lamb stomach and feet…not the liver and intestines that would usually also be included.  Thankfully, knowing our weak privileged stomachs, she made a second soup with beef so that after smiling through the feet bones, we could then eat without overthinking.

At 11:30, we walked to the neighborhood church.  Since we were not in the city center, we could fit inside the building, and everyone around us seemed to be locals rather than tourists.  I know this because no one had their cameras out.  We arrived late to avoid half an hour of singing, but we got there just in time for the lights to go out.  From the front of the church, the priest arrived carrying a three-pronged candle, and everyone swarmed him to light their own.  Then people turned to light the candles of people standing next to them, and so on, until the whole church was lit again with our own individual lights.

Everyone walked outside to the already-set-up platform where the priest and his male helpers (again, still only men) continued to sing and to read from the gospel of Mark.  When some moment had passed, the church bells began screaming in loud exaltation, the men sang in unison the song of Jesus’s resurrection, and everyone turned to hug and kiss each other.  It was really lovely.  The joy of the moment was so evident despite my lack of understanding the details of anything.

We walked back to Kendra’s apartment so that we could crack eggs.  This is a little like the Thanksgiving wishbone tradition in the United States.  Everyone claims a hard-boiled egg, and then you go around knocking top-top and bottom-bottom with everyone until only one egg remains unbroken.  That person gets momentary fame, and as the owner of the egg with the strongest bottom, I can assure you that although momentary, the fame is sweet.

It was about 1:30 a.m. before everyone left, and I spent the night on Kendra’s couch (with her cat!!!) because there were no buses headed back to Pikermi at that time of night.  As for Easter Sunday, well, I’ll save it for my next A Week in Greece post since it was lovely but not specifically Easter related. 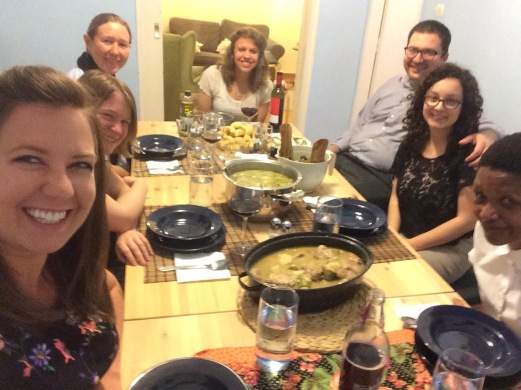