Yesterday’s post ended in tourist-heavy Bled, so this morning my mom and I woke early to get outta there. We didn’t even take a boat out to the tiny island that graces the cover of every Slovenian guidebook in existence. Instead, we drove 4km to Vintgar Gorge at 8:15 am. My brother was in Slovenia last month, and he strongly suggested we go early to beat the crowds if we wanted a magical experience.

And it IS magical. It’s literally a gorge with no possible way to walk near it except for wooden walkways built into the side of the cliff. It feels very Swiss Family Robinson, and since we were some of the first people of the day, it felt like adventure and discovery.

By the time we reached the end and headed back, the walkways were packed with people. Some were blocking the path to take pictures and others were grumbling at the path-blockers, and it was altogether a different experience. We found a brief respite by climbing down to the water by one section where people have built hundreds of little rock towers. We built our own and left our mark on Vintgar Gorge! 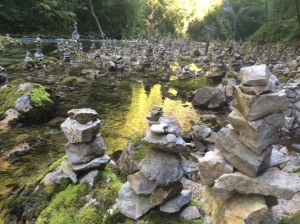 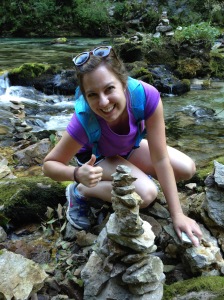 We drove from there to Bohinj, which our guidebook promised was the better-but-less-crowded version of Bled. We didn’t actually stop at the lake, however, choosing instead to go straight to the waterfall, Slap Savica. The road there felt impossibly tiny, and my Midwestern American roots were constantly confused by drivers who sped around corners and bikers and oncoming traffic.

The waterfall itself was not super impressive, only because the path bottlenecked at a gate that kept us far from the falls itself. But the hike up 500 steps was lovely, and I can never get over how great it is to smell grass and dirt and trees.

We headed back to Bohinj and got our hotel room at another cute little 20-room farmhouse/chalet/I don’t know names of things. It was only 2:00, so we decided to drive a couple hours to Kobarid in the northwest. We only got half an hour into the drive before I called it quits – we were on even tinier roads already climbing high into the mountains, and despite singing along to the Hamilton soundtrack, I didn’t think I had the emotional fortitude to stay sane the whole drive (or especially coming back in the dark).

Instead, we went back to our hotel and I stress-napped. Or real-napped, since it had already been a very busy day! At 7:00 we walked to a nearby hotel for a fancy (but discounted through our own hotel) dinner. Then we walked to the lake, got ice cream, and watched the sun set.

Oh, and I was COLD tonight. I haven’t been cold in months!