Whoops, I almost forgot to post this week’s A Week in Greece, which would be a shame because a lot happened!

Last Sunday, I went to church with an OM volunteer, and there is something so nice about walking in with someone instead of alone.  After the service, she left, but I had like, three conversations with different groups of people, at which point I realized, IT HAPPENED.  I have people at this church.  The day got even better when Kendra and I went out to lunch at a brunch place nearby.  I haven’t had brunch in ten months, and wow.  Wow.  It was so good, both the food and the conversation.

On Tuesday, Mercy came to my part of town.  Everything usually happens downtown, which means metro-ing places, and I am just too lazy for that!  So instead of asking “what do you want to do?” I just straight up suggested she come to the awesome park/coffee shop near my house.  She did, and it was great.

I am super blanking on things.  Work was mostly fine this week…oh yeah!  We didn’t have work on Friday, because it was Oxi Day.  I went to my Greek lesson, though, then went out to lunch with Dina, Adriana, and a visiting donor person.  We went to this fantastic little taverna within walking distance of my house, which is great because I thought I had to go downtown for authentic Greek food.

Later, Luciana invited me to go pumpkin shopping, so we went to this cute little imported foods grocery store, bought a pumpkin, and went back to her new apartment.  We ate and talked and shared YouTube videos until we suddenly realized it was after midnight.

I went home for the night, but on Saturday, Luciana and I hung out again because it was time to carve that pumpkin!  We also roasted pumpkin seeds and made boba tea and ordered souvlaki, so it was a whole conglomeration of cultural experiences.  Super fun!  I’m glad I got to carve a pumpkin – they aren’t very common in Greece, so it almost didn’t happen.  I don’t think I’m going to do anything for Halloween (also not very common in Greece), so Saturday was my celebration. 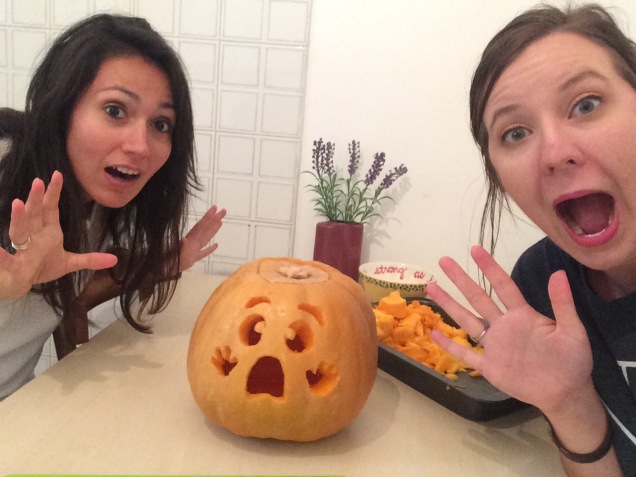