At 5:30 this morning, Amelie and Nelly were packed up in crates and left my house to fly to their new homes in England!  I’m so glad that they’ve been adopted, and by people who will love them for who they are.

Nelly will go to an older woman’s home who, twenty years ago, came to Greece and rescued four kittens who had been thrown into the garbage.  Now that they’ve all passed on after a long life, she wants another Greek kitten in their memory.  Amelie was a bit trickier, since she is so shy.  But a middle-aged woman chose her precisely because she wanted to create a safe space for a traumatized cat.  I’m so excited to be updated on how they’re both doing.

I will miss them, though!  It was nice to be able to open windows (there are no screens in Greece, so I couldn’t do so without risking escaped cats) and deep clean my apartment, but it feels very strange to come home to an empty house.  They’ve been so much fun, especially these last couple weeks when they really took to each other and started bathing each other/fighting each other.

Last night, I woke up around 3:00, which set Nelly off.  I noticed a shadow lurking near the bed, so I stuck out my hand, and Amelie came over to purr and pet herself.  She then jumped on my bed, fought with Nelly for a bit, and jumped back off.  This is the most she’s ever done, so I eventually drifted off to sleep.  A while later I was awoken by a cat curling up between my feet.  Nelly had already returned to her place against my side under the covers, so it was Amelie!!  Sleeping on my bed!!  For the first time ever, and for only two hours before I had to wake up and put them in their crates.  It was very bittersweet, but I hope she regains that level of comfort with her new family as soon as possible!

I have had such a great time fostering Amelie, Nelly, and Hans Harrison (last year for nine months).  I really admire the work that Nine Lives does in Athens, and I strongly encourage anyone reading this to consider becoming a foster parent for animals who need a temporary home while waiting for forever family.  If you can’t do that, I subtly suggest that you drop a few dollars in Nine Lives‘s bucket.  I can attest to the quality of their work, and I wish them all the best as I leave Greece. 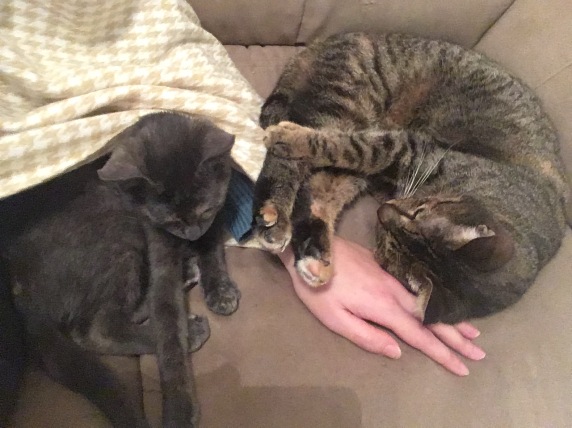