This is Day 2 of my fulfilling Short Story Long‘s 30 Day Harry Potter Challenge.  Check out previous questions at the end of the post!

Day 6: Which house would you want to be in?

This is the most important question in the universe.  For a long time, I thought I would be sorted into Ravenclaw.  Being smart is my thing.  But when I signed up for Pottermore, J.K. Rowling’s official Harry Potter website told me I belonged in Gryffindor–and thus began a mild existential crisis.  I never really wanted to be in Gryffindor, because that’s where everyone wants to be, but…what if I was wrong?  After all, I can’t argue with Queen Rowling herself!

The kicker came when my friend Lindsay gave me a Gryffindor Quidditch t-shirt for my 27th birthday (getting older but never growing up).  I asked how she chose the house.  She said she was debating between Ravenclaw and Gryffindor, but while I value my intelligence, she thinks I have a stronger desire to be brave.  And she was totally right.  So.  That’s the extremely long answer as to why I, a Ravenclaw, would definitely be sorted into Gryffindor (like Hermione and Remus Lupin).   END_OF_DOCUMENT_TOKEN_TO_BE_REPLACED

At my birthday dinner, Lindsay passed me gift bag.  I gleefully tore away the crinkly paper to pull out a red t-shirt.  I gasped.  “Gryffindor Quidditch?  Team Captain!?”  Lindsay nodded proudly.  She had just returned from a vacation in Harry Potter World. 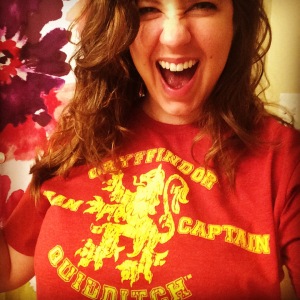 “How did you know she was Gryffindor?” another of my birthday guests asked.

“That’s exactly how I describe myself!” I agreed.

“So I couldn’t decide which shirt to buy, but eventually my mom told me to choose whichever house you would most want to be in.  And I thought, Tricia is both smart and brave, but I think she wants to be more brave, so she would choose Gryffindor.”  END_OF_DOCUMENT_TOKEN_TO_BE_REPLACED