For the last several months,
my friends April and Jess have been working on a new project:

All ten episodes of season one are available now on Apple Podcasts and Spotify.  Check out episode descriptions below if you want to pick and choose your way through our conversations about identity in our new and confusing phase of life after leaving a lifetime of evangelicalism. 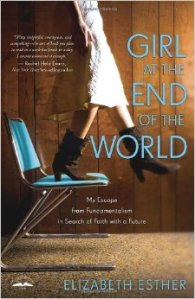 I am often drawn to books about people who grew up in conservative Christian circles who wind up abandoning their faith because of the pain in their past (like Jesus Land).  I want to understand how the faith that so empowers me has hurt other people so badly.  And I want to know how God’s people too often lead others away from God instead of toward him.  Many such spiritual memoirs end with the author swearing off religion, but in Girl at the End of the World, despite a childhood of emotional, spiritual, and physical abuse, Elizabeth finds her way back to faith, not through the fundamentalist religion of her past, but through the mystery-embracing truths of Catholicism.

Then I realize: She isn’t just Jesus’s mother.  She is the mother of our Lord and Savior.  Mary is important.

I touch my tender belly and think of the twins growing inside me.  I’m not just a mother either.  I am important.

The thought breaks over me like the rising dawn of a new day: What if God is pursuing me through the gentle love of His Son’s mother? What if, knowing that all the masculine roads to God are blocked for me, Jesus has sent His mother to lead me back to Him?

The granddaugher of the founders of The Assembly, Elizabeth grew up in a religious cult.  She writes about the pain of her childhood and the intense anxiety it provoked with raw honesty that absolutely draws the reader in.  She isn’t hesitant to expose herself, her family, or her faith, and because of that, her story is a beautiful portrayal of brokenness and hope.   END_OF_DOCUMENT_TOKEN_TO_BE_REPLACED