My friend Jenna has always wanted to go to Machu Picchu, and I have never been interested in joining her.  But when travel blogger Nomadic Matt recommended this book about a guy researching Machu Picchu’s discovery while exploring the Incan ruins for himself….I got totally hooked!  Where is my ticket to Peru?  I’m ready to go!

Well, not really.  If Adams did anything successfully, it is convey the physical toll of climbing up and down numerous mountains.  I’m not hugely into exercise, but he’s also brilliant at describing the stunning views from those same moutaintops.  I’m willing to work through the pain for the reward.

Alternating between stories of Hiram Bingham III’s adventures throughout Peru in the early 1900s and Adams’ current day struggles to retrace his steps, Turn Right at Machu Picchu does an incredible job of making history lessons accessible and interesting.  This is obviously helped by comparing Bingham to Indiana Jones.

I was totally won over, which goes to show just how dangerous books are.  300 pages later, and I’m ready to drop a couple thousand dollars to visit a new and beautiful location! 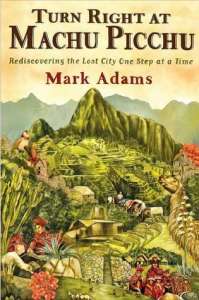 In the official version of the story–the twentieth century’s most famous tale of discovery–July 24, 1911, was a day for the history books.  For on that rainy morning, the young Yale lecturer Hiram Bingham III climbed into the Andes Mountains of Peru and encountered an ancient city in the clouds:  the now-famous citadel of Machu Picchu.  Nearly a century later, news reports have recast the hero explorer as a villain who smuggled out priceless artifacts and stole credit for finding one of the world’s greatest archeological sites.

Mark Adams has spent his career editing adventure and travel magazines, polishing hair-raising tales about the exploits of famous explorers.  So his plan to investigate the allegations against Bingham by retracing the explorer’s perilous path to Machu Picchu isn’t completely far-fetched, even if it does require him to sleep in a tent for the first time.  With a hard-as-nails Australian survivalist and several Quechua-speaking, coca-chewing mule tenders as his guides, Adams takes readers through some of the most gorgeous and historic landscapes in Peru, from the ancient Inca capital of Cusco to the enigmatic ruins of Vitcos and Vilcabamba.

Along the way he finds a still-undiscovered country populated with brilliant and eccentric characters, as well as an answer to the question that has nagged scientists since Hiram Bingham’s time:  Just what was Machu Picchu?

One thought on “Turn Right at Machu Picchu by Mark Adams”