1| The Toast (may it rest in peace) knocks it out of the park with their list “How to Tell If You Are In A J.R.R. Tolkien Book.”

“You’ve come into possession of a magical object of world-imperiling demonic power, which you use primarily to avoid awkward small talk with your neighbors.”

2|  I love the Marvel movies for their humor, but especially because they manage to make movies with humor AND serious investigations of trauma via the characters of Steve Rogers, Bucky Barnes, and Tony Stark.  Check out “I Can’t Trust My Own Mind”: How the Marvel Cinematic Universe Engages with Trauma if you also find this interesting!

3|  Barack Obama and Justin Trudeau are the CUTEST BFFS on the planet.

4|  Hilary Clinton recognized the closing of The Toast with this amazing piece about women’s spaces and AHHHH I already supported her, but this solidifies it. 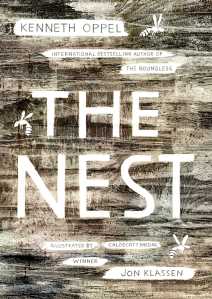 Whaaaat a weird book.  Now that I’m done with it, I guess it’s about a pre-teen with some severe mental disorders – anxiety for sure, but also possibly schizophrenia.  It is utterly disorienting to be in his brain, especially for me, because my reading habits predisposed me to think that this was fantastical.  I’m still not entirely sure it wasn’t.

Steve, the aforementioned pre-teen, has a history of anxiety and OCD-like symptoms.  They have taken a turn for the worse ever since his parents had an unhealthy baby that may or may not survive.  He’s always had nightmares, but now his dreams include a seemingly benevolent wasp who promises to replace his baby sibling….if only Steve will help them by opening the window and letting them in so they can do their work.

If that sounds ominous, IT REALLY IS.  Now, I have a negative tolerance for scary stuff, so perhaps I am overreacting.  But his dreams and the subtly shifts in the wasp’s tone from understanding to demanding really creeped me out.  Oppel does a phenomenal job allowing for Just Enough reality to make sense of Steve’s hallucinations…but then there are times it really does seem the wasps are relaying information to him while he’s asleep!

It’s super weird.  But it’s also super short, so I highly recommend you set aside a couple hours to read it and let me know how you made sense of it all.   END_OF_DOCUMENT_TOKEN_TO_BE_REPLACED

This is an excellent book for people who have ever been in an unhealthy relationship (everyone).  The three sections, “Unsafe People,” “Do I Attract Unsafe People?” and “Safe People” concisely describe the patterns of relating that people naturally fall into.  Cloud and Townsend help their readers identify people in their life who are unsafe, and equally important, help readers identify what personal habits they have that perpetuate unsafe relationships.

Boundaries (which, coincidentally, is another book by Cloud and Townsend) play a huge role here.  I loved the delicate balance they find between owning our own flaws and holding people responsible for theirs.  There’s no blaming, just understanding.  And there is so much hope!  Whether you constantly find yourself in draining and/or abusive relationships, or perhaps you simply have a person or two in your life that drive you nuts, this book offers the possibility of reconciliation, growth, and maturity.  I loved it, even when some of the descriptions were a little too on-the-nose.  END_OF_DOCUMENT_TOKEN_TO_BE_REPLACED